This year I went through all of my blog posts and pulled a lot of photos due to bloggers being sued by the owners of the pictures. Yes, I admit I have also left a lot of pics, and have since used Creative Commons and link back to the origins, but I’ve also used many of my own.

If I can photograph it, then I copyright it, as many of you would have noticed.

One of the reasons I went back through my own photos and copyrighted them was because several people had used my personal pictures of my Samantha Wills jewellery in their eBay sales pages.

I had to email three sellers last year to remove my pictures from their listings or I would report them to eBay. They all complied.

And this is your first step to getting your pictures removed from their listing. Email them asking to remove it and give them a 24 or 48 hour time frame and if they don’t comply you will report them to eBay.

Step two, if they don’t comply within your time frame, click the report button on the listing page itself and fill out all the details. Ebay will get back to you when they go through the motions.

So I thought this time, since I had posted copyrighted photos then the problem would be solved.

I have no issue with bloggers or Pinterest boards showing my pics if the link back to my website is there (as long as it’s not for political or personal garbage), but to use other people’s personal photos to sell your own jewellery on eBay is ridiculous.

Especially when you also put your own pictures in the listing as well.

This morning, the 11 th of December, I was scrolling through the listings for Samantha Wills jewellery and saw ANOTHER of my photos in a listing, on the listing page itself. 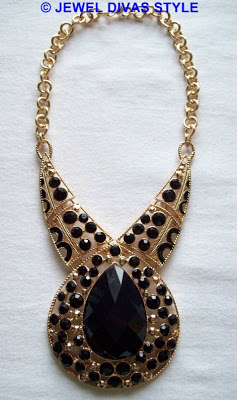 (you can read the full page here, it was only a few weeks ago and it clearly says I got it from LOVISA)
At 8 am I emailed the seller and told them to – “PLEASE REMOVE MY COPYRIGHTED PICTURE FROM THIS LISTING OR I WILL REPORT YOU. WHY DO YOU THINK IT’S COPYRIGHTED, SO SELLERS ON EBAY DON’T KEEP USING THEM. IT’S NOW 8 AM ON TUESDAY MORNING, YOU HAVE 24 HOURS TO REMOVE IT BEFORE I REPORT YOU.”
She complied within 20 minutes and replied – “Sorry I didn’t even read that text on the picture. I have removed the picture from my listing.”
Which was fine. But I was curious. Curious as to why a seller, any seller would need to use someone else’s photo when they also posted their own. So I sent another email. “You posted your own pic as well, why was that not enough? Why did you need to scour the internet for another photo, which was clearly copyrighted, and how you didn’t see that I don’t know. I also never said that necklace was Samantha Wills. In the post you copied it from I clearly said it came from Lovisa. So I am astounded as to why you needed my photo when you posted your own. Please tell me why sellers use someone else’s photo when they still post their own, because I don’t understand it.”
I was trying to understand why people would do it. Especially when the picture was clearly copyrighted, because I just don’t get why sellers would need to do it, so that’s why I was asking.
Well, she didn’t like my asking, so she replied – “I apologized, it was an honest mistake. There’s no need to be continuously rude about it. I used it because its better to have more than one photo for potential buyers to see. That’s obvious. I didn’t see what was written AT ALL and I don’t know what the big deal is anyway. It’s just a photo of a necklace. Nothing special. Get over it.”
So that annoyed me as I was not being rude. I was trying to understand why people did it so I thought I’d ask someone who had done it. And she was the one being rude as far as I’m concerned. So I sent this message – “I’m not being rude about it, I seriously don’t understand it that’s all. And the big deal is, you used someone’s COPYRIGHTED photo from their blog, by law, that’s illegal and had I have told ebay you would have possibly be banned. That’s not being rude. And if it’s just a photo of a necklace, which I NEVER said was Samantha’s, it came from Lovisa, then why did you use it?”
Some people just get rude. Whether it’s in blog replies or when you email them. Unfortunately the nuances of a conversation, question or comment cannot be put forth through electronic communication and so people assume it’s one way when the person sending it meant another.
Of course, some people just think they’re in the right and to hell with the law and using someone else’s copyrighted photos.