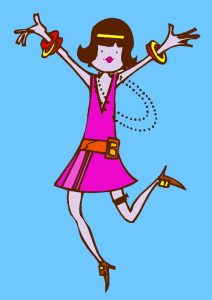 I thought I’d post some fun facts about me and my jewellery and book business!

– Tiara makes all of her jewellery by hand.

– Tiara currently has over 2000 pieces of jewellery in her own collection.

– Tiara loves jewellery so much that Jewel Divas was created in 2008.

– The Jewel Divas Style blog started off as Jewel Divas Jewellery on blogger in 2009. It was purely for talking about the business and promoting what was for sale. But it was updated and changed in 2012, when Tiara started talking about other things besides jewellery. She showed off her own collection and did posts showing how to make jewellery. The blog moved over to WordPress in 2013.

– After reading blog posts about bloggers turning their blogs into books, she thought, why not, I actually know what I’m doing. She wrote and released How To Be A Jewel Diva in 2014. It was turned into a paperback in 2017.

– In 2015 Tiara wrote Closet Confidential off the back of her styling course and it was turned into a paperback in 2017.

– Tiara hand writes all of her fiction books/stories then types them up. Some non-fictions (Jewel Divas and Closet Confidential) are typed straight up.

– Tiara does most of her e-book covers herself, and mock up covers for the books that will be turned into paperbacks so the designer can see what she wants.

– Tiara sometimes picks out a cover photo before a title or story idea comes to her.

– #teenblogger came about with writing T.K. Wrathbone stories, but upon reading it, it was too light for T.K.W. so she released it under her own name. It’s just as relevant to adults as children.

– The title for Poems Of A Musical Flavour came to Tiara out of the blue. Without music can song lyrics be considered poems? Hence the title. The 6 volume series are song lyrics Tiara wrote over the course of 1989 to 2002. She might get back to writing some one day.

– Tiara has two jewellery inspired series on the boil. It couldn’t be helped; of course she was going to do something…

– Tiara loves disco balls, chandeliers, rainbows, palm trees and flamingos. Anything that glitters or reminds her of The Gold Coast in Queensland.

– This was the original Jewel Divas jewellery logo, but now it’s just the company name…even though Tiara’s young at heart, the logo needed to grow up. It will be undergoing a makeover sometime in the future if the company continues.

– At this point in time, Tiara’s not making or selling jewellery. With arthritis in her hands, and multiple books and pen names to deal with, she’s concentrating on her writing and publishing company.