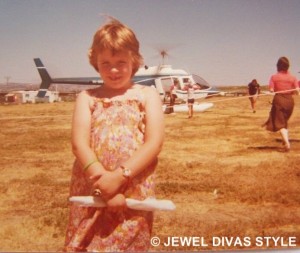 I’m not exactly sure when my love for jewellery started; there’s a photo (left) of me at six or seven wearing plastic jewellery from the one and two cent machines outside of supermarkets in the seventies and eighties. Plastic was enough at the time. I was a kid; it was all I needed.

As I grew so did my collection, although not until I left high school and had some money to spend. After 1994 my collection grew bigger, going from being hung on a pin board to being stored in a tallboy and now, twenty years later, living in two huge five drawer roller cabinets.

I wish I had the space to display it all but unfortunately at this time that’s just not possible. I’d set up a room of glass cabinets and shelves and buy a hundred busts to display all of my favourite pieces, but I also know that wouldn’t be the best for them.

I have no idea why I’m obsessed by sparkle, bling, jewels and gemstones. It could be the rainbow spasms of light that flash in shafts of lightning around the room as surely as a disco ball. The colours and shades catch not only my eye but my attention and capturing it, hold it for that few milliseconds of time in my never-ending dull day. Sparkle makes me happy, whether it’s from jewellery or disco balls, or simply watching a double rainbow appear in the sky outside my window.

I’ve occasionally wondered if my deceased Grandma had something to do with it. She had left each of her grand-daughters a tapestry and piece of jewellery. I ended up with the tapestry, one I didn’t choose but is nice enough, and never got the piece of jewellery as it was stolen from me due to selfishness and disrespect of the dead. I have no idea what I was supposed to have got. I was a teenager when she passed and never got to go to Perth for the funeral or the reading of the will. So I’ve often wondered if this was her way of making up for me not getting the piece she wanted me to have. She pushed me into buying, making and creating so I would have more than enough to make up for it.

I love it to obsessive death and really don’t get how people who design it barely wear it or wear just a couple of pieces. I love drowning myself in it when I get dressed up and I’m never without a big pair of earrings and big funky watch even if I’m just running to the doctor.

If you love jewellery, then go ahead and live your life drenched in it! It hurts no one, let’s you live like a disco ball and is an easy way of getting sparkle into your life.