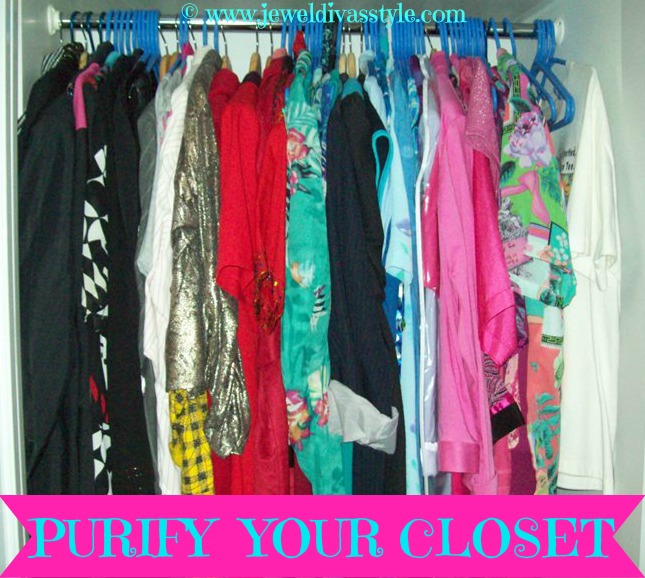 I’m back for another year and this year is going to be a “journey”, not only with my weight and health but with my clothing style as well.

Before I get into that though a quick update, thankfully this xmas/new year I did not get sick. After being sick for ten years in a row I finally wasn’t and that’s great. I also got mass amounts of paperwork done so I’m thankful for having two months off. Not only do I do my yearly cost diary for the cash I spend, I do one for what I spend on the credit card too. I updated my Nancy Drew paperwork which had been sadly lacking for four years and the cost of that collection has increased as well the amount in the collection which had a thorough cleanout and reorganize. I reorganised my bead stash into pretty pink roller containers and made up a ‘packing station’ container with all the gift wrapping, boxes, bags, tissue and ribbons, plus cleaned out everything in general.

Now, onto the good stuff. Back in November I did the two week Closet Confidential sessions where I told you all about how I audit. Well, I got into a mad cleaning and decluttering frenzy during the course of those posts and I’m still going in my wardrobe three months on. I was so excited about it all that I’ve kept at it, purging, sorting, decluttering, and cleaning out from 25 plus years of life (although I’m 41 this year so what does that say about how we all hang onto things?).

I decided to overhaul more than just my wardrobe. I overhauled my music collection, ridding myself of cds I no longer play or use and just kept the good, collectable stuff in a huge clear roller container (at least 100 cds went and about 50 cd singles). There were desks and drawers, containers, cupboards, boxes, anything and everything. I raided my shoes, bags, make up purses (or cosmetic purse collection in general), belts, scarves, anything I could think of to clear out and sort through as the collections have all become mighty in their size. The wardrobe, mind you, is an ongoing beast.

I threw out at least 7 pairs of shoes last year but then replaced them with 7. As everyone knows, shoes need updating or repairing and if they cannot be repaired then out they go. So they got replaced. Sandals replaced with sandals, boots with boots etc. Shoes are understandable though, we use them more than clothes. But the wardrobe itself took on mass proportions with reorganizing to use every inch of space, shelf and hanging that I had. Take a look.

Top hanging space before – I had 2-3 things on each hanger which is a bad idea for being able to see things with one glance. 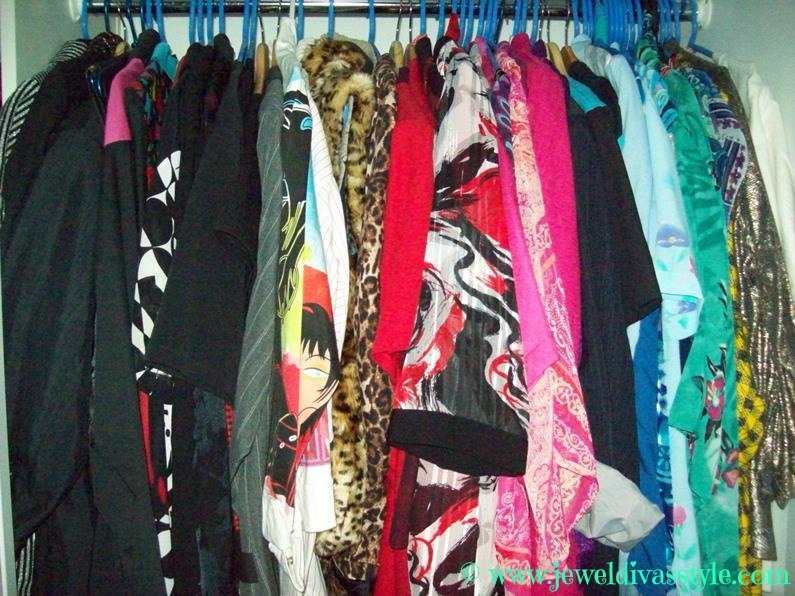 After – every blouse, vest, shirt, kaftan, blazer all have their own hanger, even some jackets fit on the top shelf as I had extra room. I don’t hang tops; they’re all folded on the shelves. And I’ve sorted and thrown out some more since taking this picture. 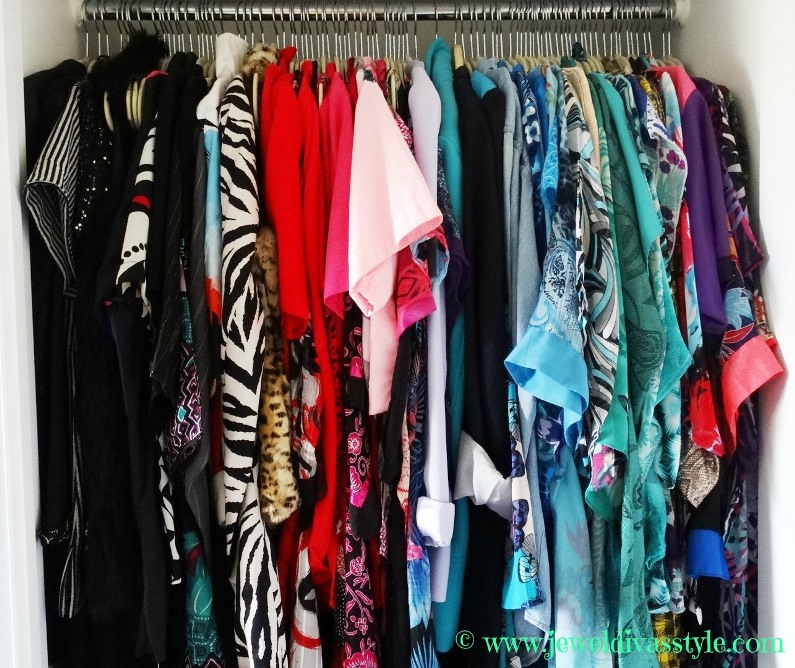 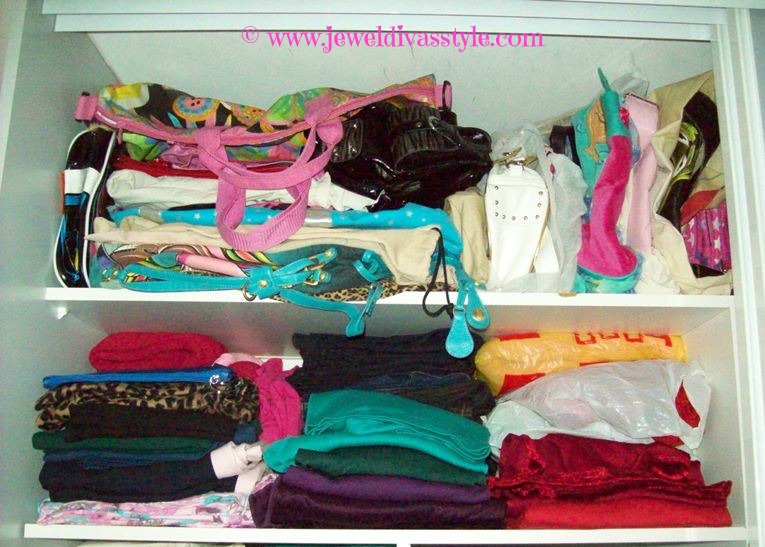 Shelves after – I used two of the pink containers for knits and jumpers/tracksuits that I don’t wear often, no need for them in summer. I also used two for my bags. I simply tucked the lid in and lay them on their side, using them as shelves for my bags. 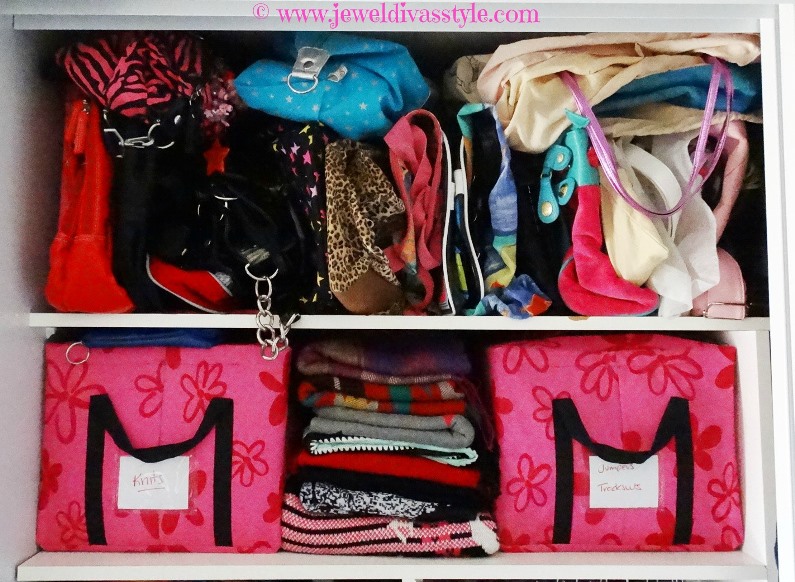 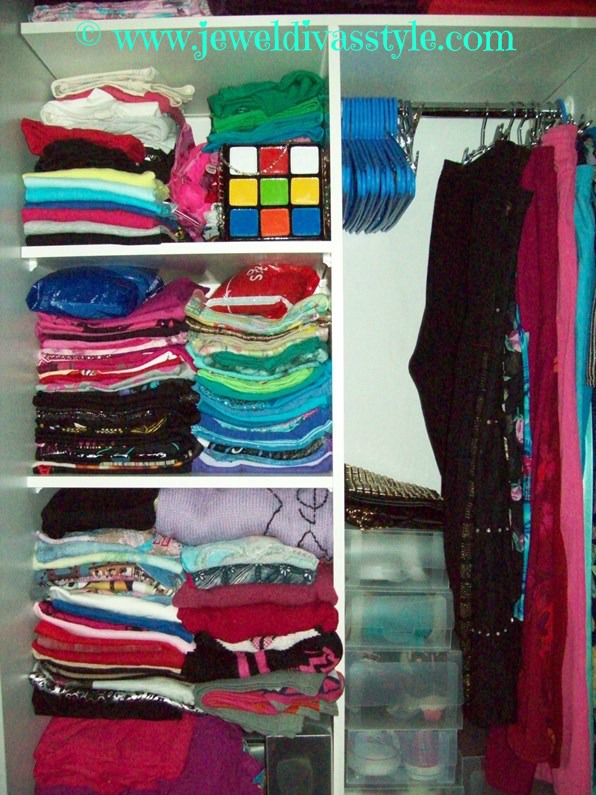 Long shelves after – Tops folded neatly and the right way. Two shelves of short sleeve tops, one for long sleeve tops, bottom for tshirts. Of course the shelves are deep enough to tuck things behind each pile, such as work out gear, winter jeans, tights and tops that I wear under my see through blouses and kaftans. I have plenty of both. 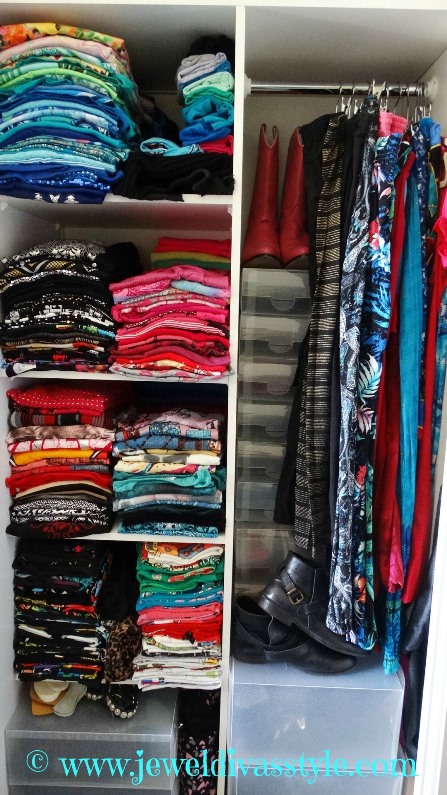 I got into my wardrobe on Christmas day. The shelves had been done a month earlier while waiting for my new hangers, but I didn’t get them until the week before xmas, so I did it on xmas day.

It was a quiet one for us, mum slept in so I had the peace and quiet, and I finally wasn’t sick so I had the energy. And even during the re-hanging I still threw stuff out as I went and kept going over and over my clothing lists (each colour has its own page), and asking myself the same questions over and over. Will I wear it? Does it suit me? Would I wear it in Queensland (I mentioned several years ago I wanted to move there)? Essentially, is it me anymore?

What I did find during my clothing audit is that I bought more clothes in 2014 than probably any other year.

I ditched at least 70 pieces of clothing over the last 12 months and bought at least 96. So almost one for one, or, to get mathematical, for every 1.37 pieces bought, one went. I ended the year with 481 pieces of clothing, 450 pieces of accessories and 1881 pieces of jewellery. My jewellery costs the most (three times the cost of my clothes), followed by my clothes and accessories close behind. And sadly, I have a want list of about 50 things that I’m after, so hopefully I can keep a reign on my spending this year.

I recrafted my clothing lists. They’re still in their colours, but I did my tops in separate columns. Long sleeve, short sleeves, tanks, then there’s jackets, cardis, kimonos/boleros, jumpers, etc. Dividing up my tops into long, short and tank columns really helped me see how many I have so I don’t double up in future, and I can get what I do need to fill the gaps. I also figured out which year I had bought each piece in and was pretty damn close to getting them all right. That’s how come I know how many I bought last year.

I still have a list of other pieces that are on the chopping block ready to go by the end of this year or sooner. It seems 2015 is the year of the purge for me. What about you guys?