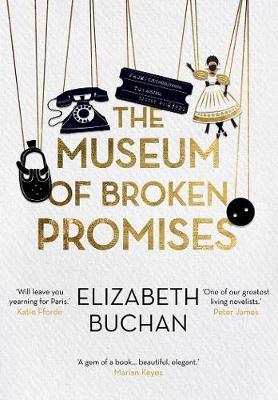 The Museum of Broken Promises by Elizabeth Buchan.

Paris, today. The Museum of Broken Promises is a place of wonder and sadness, hope and loss. Every object in the museum has been donated – a cake tin, a wedding veil, a baby’s shoe. And each represent a moment of grief or terrible betrayal. The museum is a place where people come to speak to the ghosts of the past and, sometimes, to lay them to rest. Laure, the owner and curator, has also hidden artefacts from her own painful youth amongst the objects on display.

Prague, 1985. Recovering from the sudden death of her father, Laure flees to Prague. But life behind the Iron Curtain is a complex thing: drab and grey yet charged with danger. Laure cannot begin to comprehend the dark, political currents that run beneath the surface of this communist city. Until, that is, she meets a young dissident musician. Her love for him will have terrible and unforeseen consequences.

It is only years later, having created the museum, that Laure can finally face up to her past and celebrate the passionate love which has directed her life.

An interesting title, and one would hope that the novel would be woven full of stories about the items in said museum, but, alas, there were few.

The story revolves around Laure Carlyle and her journey, one that is not as intriguing as the blurb belies (and there’s also a mistake in the blurb). While I did cry towards the end (I hate death and sad endings), and the story wraps up, it’s not as rounded out as I would have liked. But then, it wasn’t my story to tell.

The only issues I had were with the formatting which resulted in the layout being hard to follow. Flashbacks were not italicised which resulted in confusion as to what time she was actually in, or whether she was actually having flashbacks or past thoughts. I had to go back and check what I was reading to make sure. Some chapters were dated so you knew when the story was happening, but if it happened in the middle of the story, confusion reigned. It’s one of the things I hate about books, when jumping back and forth it needs to be made clear so we can keep up.

Overall I gave it 5/10. A different premise based on some reality, but it wasn’t an in depth story and could have been better. 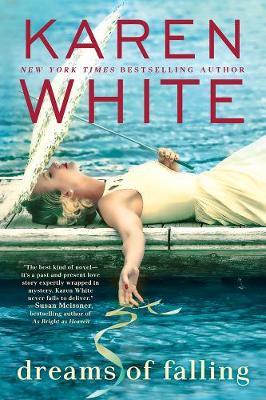 Dreams of Falling by Karen White

On the banks of the North Santee River stands a moss-draped oak that was once entrusted with the dreams of three young girls. Into the tree’s trunk, they placed their greatest hopes, written on ribbons, for safekeeping–including the most important one: Friends forever, come what may. But life can waylay the best of intentions….

Nine years ago, a humiliated Larkin Lanier fled Georgetown, South Carolina, knowing she could never go back. But when she finds out that her mother has disappeared, she realizes she has no choice but to return to the place she both loves and dreads–and to the family and friends who never stopped wishing for her to come home. Ivy, Larkin’s mother, is discovered badly injured and unconscious in the burned-out wreckage of her ancestral plantation home. No one knows why Ivy was there, but as Larkin digs for answers, she uncovers secrets kept for nearly fifty years–whispers of love, sacrifice, and betrayal–that lead back to three girls on the brink of womanhood who found their friendship tested in the most heartbreaking ways.

One, the formatting was atrocious and constantly hyphenated words at the end of a sentence. For the love of god, fix the formatting so this doesn’t happen. It’s annoying as hell.

And two, the female lead is immaturely annoying.

Now, yes, she’s only 27, but still lives in the past when she was 17 and used by the boy she had a crush on, her best friend who she smacked in the head with a cooler, and the daddy issues she’s still dealing with.

I won’t give any of it away, but I wanted to smack her in the head and tell her to grow up and stop not only living in the past, but to get over the twat that used her.

While the concept of the story is interesting, I found it very similar to The High Tide Club by Mary Kay Andrews. There are tears to be had, if you don’t like death, and there were parts I wished had been explained more, such as what happened in 1951, what happened to the male lead and his second marriage, and how everyone can so easily forgive. So you have to connect a few dots together.

It’s not a quick read, took me about four or five hours.

The last reviews are coming on Thursday.