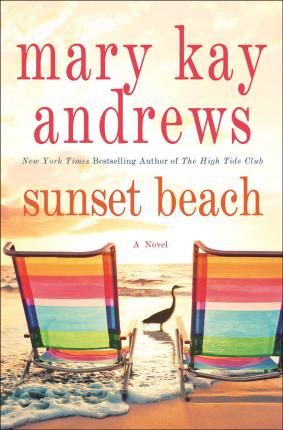 Pull up a lounge chair and have a cocktail at Sunset Beach – it comes with a twist.

Drue Campbell’s life is adrift. Out of a job and down on her luck, life doesn’t seem to be getting any better when her estranged father, Brice Campbell, a flamboyant personal injury attorney, shows up at her mother’s funeral after a twenty-year absence. Worse, he’s remarried – to Drue’s eighth grade frenemy, Wendy, now his office manager. And they’re offering her a job.

It seems like the job from hell, but the offer is sweetened by the news of her inheritance – her grandparents’ beach bungalow in the sleepy town of Sunset Beach, a charming but storm-damaged eyesore now surrounded by waterfront McMansions.

With no other prospects, Drue begrudgingly joins the firm, spending her days screening out the grifters whose phone calls flood the law office. Working with Wendy is no picnic either. But when a suspicious death at an exclusive beach resort nearby exposes possible corruption at her father’s firm, she goes from unwilling cubicle rat to unwitting investigator, and is drawn into a case that may – or may not – involve her father. With an office romance building, a decades-old missing persons case re-opened, and a cottage in rehab, one thing is for sure at Sunset Beach: there’s a storm on the horizon.

I read her book, The High Tide Club, last year, and you can see that review here, so when I found more of her books that seemed interesting, I got this one from my local library.

If you love a light summer read, this comes under that. No major horror, no stick ‘em up shoot ‘em outs, there are murders, but they’re treated somewhat lightly so nothing gruesome. There’s underlying tension between the main character and her father, between her and her stepmother, and between her and her co-workers, one of which she ends up in bed with, and one which, well, I’ll let you find that out.

There were issues with the formatting. Such as a character doing and saying things over several lines and paragraphs, all of which should have been put into the one paragraph so you knew it was still the same character, which is how it should be, and is what made it confusing at times as to who was talking/doing.

There were also quotation marks at the beginning or end of a sentence that was not spoken, only thought. Which made it confusing as to whether the person was actually talking or thinking and as far as I can see, were missed in editing and should have been removed. Although I’ve made that mistake myself.

I didn’t cry during this book, thank God, so I might read more of her books in the future. 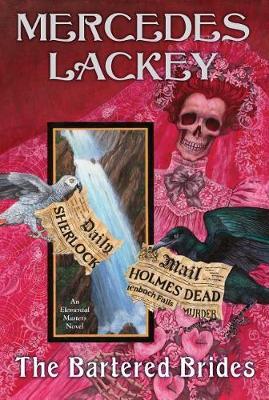 The Bartered Brides by Mercedes Lackey.

The threat of Moriarty is gone–but so is Sherlock Holmes. Even as they mourn the loss of their colleague, psychic Nan Killian, medium Sarah Lyon-White, and Elemental Masters John and Mary Watson must be vigilant, for members of Moriarty’s network are still at large. And their troubles are far from over: in a matter of weeks, two headless bodies of young brides wash up in major waterways. A couple who fears for their own recently-wedded daughter hires the group to investigate, but with each new body, the mystery only deepens. The more bodies emerge, the more the gang suspects that there is dangerous magic at work, and that Moriarty’s associates are somehow involved. But as they race against the clock to uncover the killer, it will take all their talents, Magic, and Psychic Powers–and perhaps some help from a dearly departed friend–to bring the murderer to justice

If you love anything Sherlock Holmes, try this book series.

While this book could be considered a standalone, you definitely need to have read the previous books in the series to understand fully what is going on with the elementals. I didn’t, so only got a grasp of it as it’s a large part of the story, and series.

I thought the story itself went on too long, with periods where the main characters did nothing, which I thought was ridiculous. They didn’t search for the criminals, didn’t do much except have tea and go visit friends. They clearly weren’t too fussed with the dead girls turning up in the river.

As this was the first book I read I won’t be reading the rest. But if it’s your sort of thing, give it a try.

My next reviews are coming on Monday.