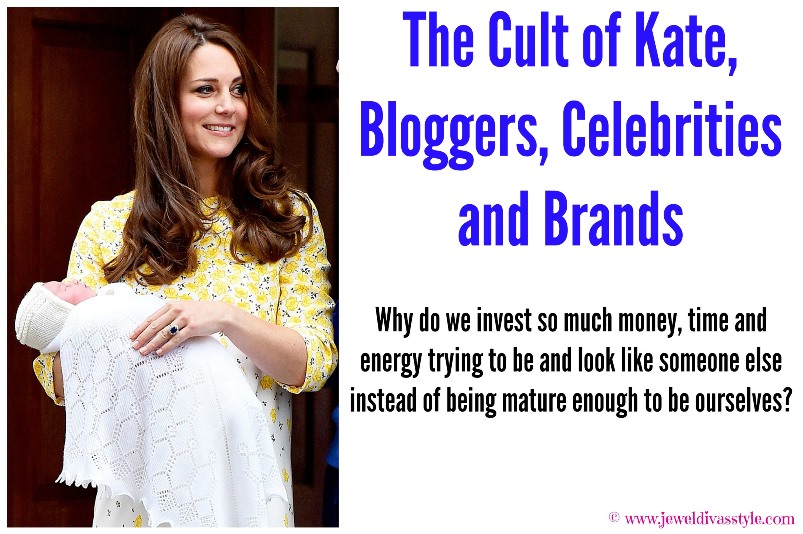 Ever since Katherine Middleton became engaged to William Windsor the female population of England took notice of what she wore. Were we happy for William after what he had been through?  Sure. Did that mean we should have suddenly started imitating his future wife? No.

I get it, really, I do. She’s essentially taken over Diana’s role in the royal family. We all wanted William and Henry to grow up into the men Diana wanted them to be and find women just like her. And just like with her, the female population of the world took notice.

Ever since the engagement, every dress, skirt, coat, top, shoes, whatever she wore, has sold out. The designers and stores could not keep up and were constantly making new batches of clothes. Now, I’m sure they just get in extras ahead of time. Now, being married for several years and having popped out heir #2, The Cult of Kate is even more frenzied, with baby blankets selling out in 0.0000 seconds flat.

What is it about her that makes other women need to be like her? To look like her? Is she attractive? Sure. Is it because she was a commoner who caught a Prince’s eye? Could be.

Other than that, I really don’t get it. Kate is petite and tiny, squillions of women aren’t. Do women think that by copying Kate, wearing the exact same outfit that they, in some way, will become her? In that case, why does anyone want to look and be someone else? Why is being yourself not good enough?

The same could be said for celebrities in general, whether musicians, actors or reality stars (although I hate calling any reality contestant a star).

Look at how frenzied fans have gotten. They go on YouTube and cry about leaving Britney alone. They get plastic surgery and collagen inserted into places that no crap should be inserted all to look like their favourite celeb such as Michael Jackson, Cher or Kim Kardashian. While this is not new, as many have done it for decades, it seems more rabid and crazy than ever. Clearly social media is to blame as that means we see them 24/7 and have far more access to them and what they wear, look like, act and behave.

Then we come to Bloggers? The rise of the blogger has certainly changed since I started in 2009. Back then you found others and followed them or people commented on your posts and you commented on theirs. Making money or being an influencer wasn’t happening back then except to encourage or inspire others to set up their own blog.

Now, we have bloggers of all kinds. Food, Fashion, Beauty, Style, Photography, Sex, Life Style, Magazine, you name it; there’s a section of bloggers for it. But now, they not only blog, they sell products to their followers and get paid for it. They promote other businesses on their blogs and get paid for it. They influence their followers to buy products they promote and these, more times than not, are given to them for free, purely for a good review that might send buyers the way of the company. That’s why management companies purely for bloggers are being set up. Purely to manage bloggers and to get them contracts with companies and businesses.

Simply posting an outfit shot could get anywhere from several to hundreds of people heading off to buy one of the products they’re wearing. To have that kind of power over people is quite scary.

And that kind of power is being used by brands as well, brands with a human face behind them. Brands owned by individuals, whose faces are the brand’s ambassadors, the faces that we see on everything. Designers with their own business in particular are quite powerfully influential. Everything they make, wear, buy is then bought by followers to the point of extremes and it’s scary.

I follow several designers and with one of them in particular they constantly post pictures of their home, pictures we’ve seen a million times before, so when I was scrolling through my Instagram feed and saw one more pic I went on past. But something made me stop. I think it was that I saw another name at the top of the pic. I scrolled back and looked at it. I looked at the person’s description and realised this was not the designer I was looking at.

Have all of these people and brands become cults? They have so much influence over the people who follow them that they simply go and buy what they are wearing.

I’m all for taking inspiration from things and places, not so much from a person themselves. I’m all for seeing something someone has such as a coat or bag and tracking one down, but I’m definitely not for buying everything from the exact place, or even becoming them.

The way I see it there are three types of copycats, which is what these followers are.

1 – You see what the person you follow wears, buys, has etc, and on the odd occasion you absolutely love something and want it yourself.

This is fine. I do it myself. It’s once in a blue moon and you take some sort of inspiration from what they wear or if they have what you were after first. This is not obsessive and not creepy.

2 – You copy the person to the exact point where you have styled your lounge, bedroom, closet to be exactly like theirs.

This is getting close to the line and makes me wonder why you have no individual tastes yourself. Why did you have to copy it to the point of being exactly like theirs instead of styling it your way? I don’t know. Do you?

3 – You’ve gotten into single white female territory and it’s bloody creepy. Why are you so insecure in yourself that you must be someone else? Creepy!

It’s like many authors on Amazon. Zombie books are coming out of every orifice it’s so ridiculous. Want a quick easy to read book? It will be about zombies. Want a horror book? It will have zombies. That’s the influence of The Walking Dead, and movies like 28 Days Later that came before it. Everyone thinks because a tv show or movie is popular that their books will be too. So these have become brands too. Tv shows and movies are brands as well.

It looks like in 2015 and beyond we need to be more worried about the cult of Kate, celebrities, bloggers and brands than any religious nut jobs as their influence is rapidly overtaking the world. And it’s creepy!

BLOG REPOST: not only did I release my new novel,

Out a day early because of the public holiday for