(pic via)
In the Nancy Drew and Hardy Boys supermystery #22, Nancy and George head to Sydney, Australia the moment blond hunk Mick Devlin calls her.
I had trouble deciphering exactly where they went, but after landing in Sydney in March (late summer according to George) (technically yes, since Spring does not technically start until March 21) they travelled north along the coast and then flew inland for about an hour to Comet Creek National park, which does not exist.
After being there, Nancy and Mick have to dash off to the Whitsunday’s Airlie Beach, Shute Harbour, Thomas Island (which I don’t think exists0 and then back to the outback.
The Outback is technically not defined, it could be anywhere from the middle of NSW and Queensland, to Northern Territory, or outback South Australia, the state I live in.
There’s no real way of figuring it out unless maths comes into it I think but I had fun trying to pinpoint where they went.
Below is a map of the Whitsundays. 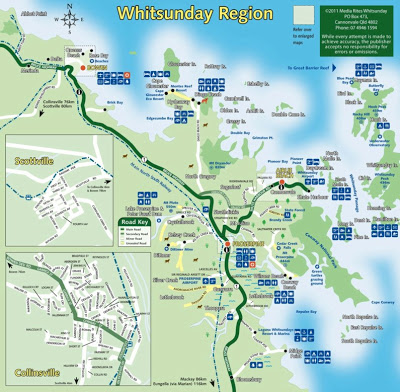