Yesterday I mentioned something about a Golden Staph infection. That’s right, I had Golden Staph over xmas and New Year and still have the red mark today. It also turns out, that my three year old great niece had it at the same time. I didn’t know until my sister told me and I said we must have had it in sympathy of each other.

I have no idea how I got it. Apparently it lives in the nasal cavities of every 2 or 3 in ten people so it can be passed on quite easy through touching something they touched. I just remember sneezing a lot and then scratching what I thought was a pimple coming up on my left cheek at xmas. Turns out, they were not pimples but blisters.

I remember the time line.

Wednesday, Xmas day, two red spots. Friday, slightly redder and larger but coverable with make-up, same on Saturday. Monday, the top one was fading but the bottom was growing. Tuesday, NYE, it had spread and was now blistering. Wednesday, NYD, spreading rapidly across my face all day, blistered and watered. Thursday, spread further and was crusted over. Friday, went to the doctor and was told it was more than likely Golden Staph, the “school sore” variety, he took a swab, gave me prescriptions for a cream and pills and off I went.

Saturday, I had to wear a huge bandaid on my face because there was no way in hell I was going to be able to cover that ugly thing with make-up without the scabs being a problem. A few people who know me asked what happened and I told them. A week later, thankfully, I was able to cover them with make-up well enough to not need a bandaid.

Told them how it was the tenth year in a row for something bad to happen.

Yep, ten freakin’ years in a row! Only because we can’t remember what happened at all the xmas’ before that. Some yes, they were horrible too, others, have no memory whatsoever!

2004 – neighbours at the back had their front tree burnt down xmas eve and we were out there spraying them. The exact same thing happened to their other tree seven days later on NYE and we were sick for weeks from the ash and fire.

2013 – Golden Staph, no internet or phone line over xmas for a week, furniture arrived late and needed to be exchanged on xmas eve.

Below is just a month’s worth of my face as I didn’t take pics until new years. You will be grossed out! 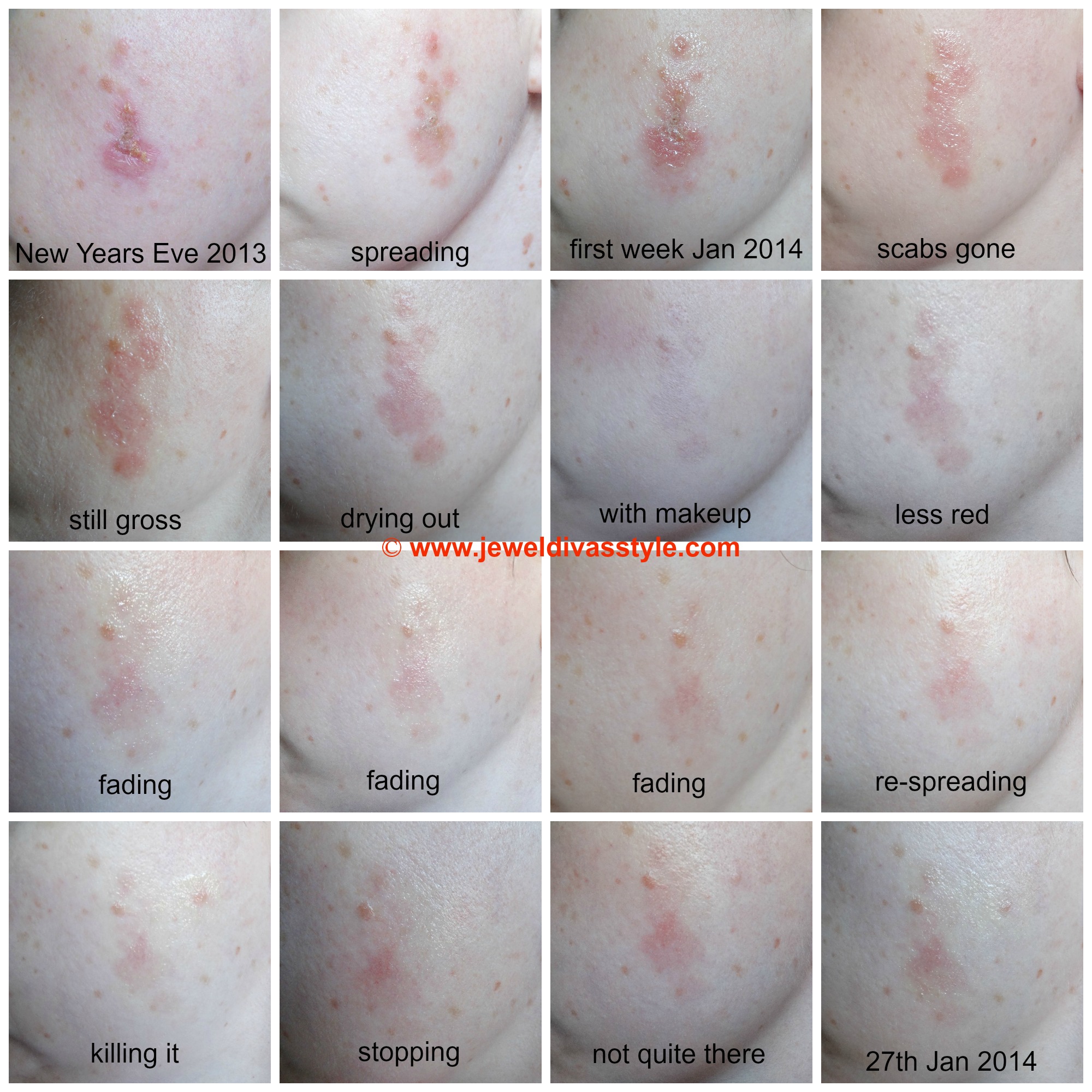 So there you have it. About a month’s worth of this rubbish on my face. It even started spreading again as one started coming up, I just smeared more cream on it and it disappeared. I don’t think the redness will leave for a while but at least I can cover it and hopefully, fingers crossed, it won’t be coming back!