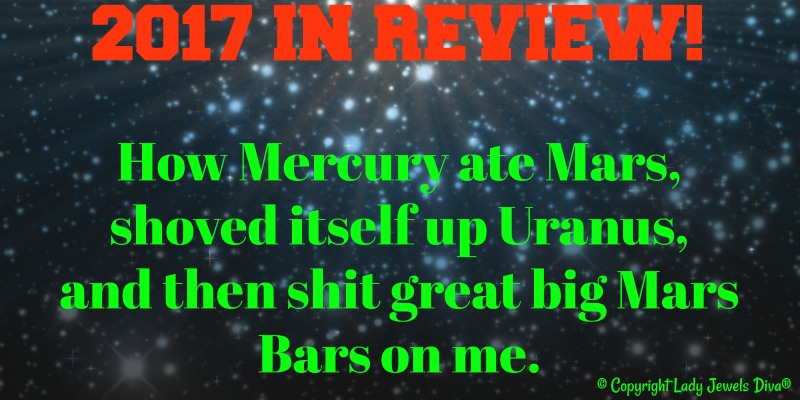 As this year wraps up, and my blogging year comes to an end, I am stressed up the wahzoo!

This year has been one of those years that shit just seemed to happen every god damn week. As I’ve been saying, Mercury isn’t in retrograde, it ate Mars, shoved itself up Uranus and then shit great big mars bars on me.

It started back in April, with my local phone store causing grief that lasted a month. Then mum’s bank, Social Security, Aus Post lost a dress, my hosting company left my websites down for a week and so I changed and then I had issues with them too. Throw in doctor’s appointments for mum and me, my arsehole brother not paying mum back, my sisters not having anything to do with us, having to deal with all of this shit on my own, it has stressed me beyond belief.

I’m constantly exhausted trying to get everything done, between my stuff, the business, mum, other shit, I don’t sleep well, have bad health and am heading for a breakdown as I mentioned last week.

But does anyone give a fuck?

If only companies bothered to listen to their customers and then try and help them achieve what they’re after, none of this would have happened.

Nope, it seems like businesses are just out for themselves and don’t give a fuck about the rest of us.

I not only need to get away from my family, but the job of caring for my mother. How the hell I’m going to do that, I don’t know, but I will not have good health and peace and quiet until I do. And until I do, I will be stressed out and having to deal with arsehole companies like I have all year.

I sure as hell hope 2018 is better, but then if the last twenty years are anything to go buy, it won’t be.

I need a damn holiday!