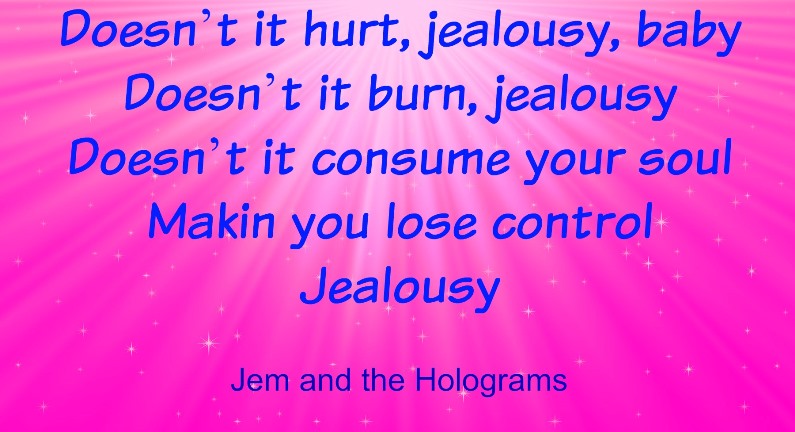 I know you’re waiting for this, aren’t you!

A few months back I received four very ridiculous comments from someone who I could only say hated the fact I bought and made goods she couldn’t afford, and she even had a go at Kmart for God’s sake.

I find it strange how she commented on old blog posts, they were from July 2 and 23, and August 6 and 11. Yet she commented on them on August 16 and 17, over a month after the first two, and jumped so many posts in-between. It’s like she picked which ones she wanted to shit on and then did.

She didn’t bother coming back to those original comments of hers but for some reason waited two months (God knows why she bothered) before returning on October 23 to leave comments on the September 23 post where I could only describe her ranting as jealousy, and September 25 post, where I showed that I am a designer because she attacked me on that level. Both were already a month old, plus she commented on a third post where I showed the two books I had written and self-published in primary school on October 21.

The way she attacks certain blog posts is intriguing, but why wait over a month to comment on them? Clearly she must be scouring my blog for some reason. Picking certain posts and leaving others. Strange!

Her new comments are laughable (and have been trashed as I said they would be) and ironically, she claimed to be laughing at mine.

“Wow this is laughable. To go on this massive rant is not only incredibly unprofessional but it makes you look worse than how you’re trying to make me look. Jealousy? Oh goodness I had to laugh!! Truth hurts perhaps?”

A massive rant? All I did was tell everyone what she’d said and give my reply. I could only guesstimate at her behaviour it was so ridiculous, and once again it’s a hater doing the hating and continuing the hate by once again insulting me. What is the point in her even commenting?

I had also talked about cancer affecting me and my family and she said the post was laughable. She’s the one who attacked me about my “tiny little cancers” and here she is laughing over my parents having cancer. Wow!

You want to talk truth. The truth is you couldn’t deal with the fact I wrote about cancer in a way you didn’t like.

The truth is you couldn’t deal with the fact I buy clothes, jewellery and accessories and post often about them.

The truth is you couldn’t deal with the fact I eat food you probably can’t.

If you didn’t have a problem with these things you wouldn’t have felt the need to attack, be petty and jealous in your insecurity and immaturity.

The truth is, you hate yourself and can’t stand what other people, think, do, say and have.

The truth is you hate yourself and are taking it out on others.

Yeah, the truth hurts, and that’s why you attack others, to make yourself feel better.

And now another person has commented on this post, again, two months later, and said pretty much the same thing, “Wow… How very unprofessional of you. Take it on the chin, ignore & move on rather than fuel the fire.”

First off, not fuelling anything since the first person never comments on the original posts, and two, again with the unprofessional? I ACTUALLY DON’T have to take abuse on the chin and ignore it, I have every right to reply and defend myself, and showing the haters for what they are.

I am wondering if it’s the same person just using a different name to attack. Funny how the comments were the same.

“Wow another massive rant, can you get anymore unprofessional? Good “designers” take it on their chin and don’t let critisism get to them, they simply brush it off and don’t give the commentors anymore airtime so to speak. But thanks for another laugh, when I am extremely bored you’re entertaining so perhaps you could add “entertainer” to your list of “professions” ??”

Seriously? Where is this “massive rant”? Once again she has shown her true colours by having a go at me, and again, using the word “unprofessional”. Apparently people and businesses aren’t allowed to discuss such things without being “unprofessional”. She insulted me and other designers because apparently she “knows” that other designers take it on the chin. I know for a fact a lot don’t and have a problem with snarky haters. Many designers don’t always stop giving their commenters air time either; many get into stoushes and go for it. In her case, I’ve sent her comments to the trashcan as I said I would on my original blog posts. Which she didn’t bother going back to read or she would have known I was going to trash her future comments.

And I’m already an entertainer, so no need to add it. Jealousy is a curse my dear and you bringing up my list of “professions” proves it. Clearly, to you, no one can have so many professions and be so many things. Clearly this shows that she has no professions herself and can’t do anything like I can. Seriously, constantly bringing up the same things and finding new things to attack me over simply shows you have a massive problem with it, them, and me, and that’s your problem, not mine.

And thirdly, she commented on “BOOK STYLE: The Golden Key and Junky Joke Book“

“I don’t get it? What’s the actual point of this blog post?”

I don’t get it? What’s the actual point of you commenting?

If you don’t like my blog don’t bother, go away and don’t come back. What don’t you get about that? What is it within you that you have to attack people? I doubt I’m the only one. What did you think when you read the blog post, that I was talking about Mars and aliens, the blog post is self-explanatory, clearly you don’t have the ability to figure that out and that makes me think you don’t get what blogs are about in general due to the immature nature of your comments.

If it’s not jealousy then seriously, what is it? If you can’t tell me that then you are either in denial or so low in self-esteem, self-confidence, self-respect and self-love that you believe attacking someone on a personal level will make you feel better?

I not only know it doesn’t, I also know that it’s not my fault or my problem.

I really don’t get the point of attacking someone on a personal level. The only reason you do it is because you have a problem with that person and it generally comes back to jealousy. It can’t be anything else. If you don’t have a problem with someone you don’t have a need to attack. What I buy, have or do is no one’s business, especially those who are going to attack me on a personal level. I have no idea who she is or what her problem is but I’m not interested.

Go and live your hate filled life away from me, because, once again, you’re not welcome here and all future comments will be trashed but turned into blog posts for my and others amusement.

Thanks so much for being the fodder for my posts.

Here’s a list of things she hates so far:

That’s a long list and clearly getting longer with each comment she makes, so in the words of Jem and The Holograms, “Doesn’t it hurt, Jealousy baby, doesn’t it burn, Jealousy, doesn’t it consume your soul, making you lose control, Jealousy.”

Wearing a skirt for the first outfit of the year..

For some of us life was actually normal and stayed