It had been in need of a new theme and new logo for quite a few years, and so I finally decided to get a logo done, and update my theme as I had the time and the money.

With that new logo comes a whole load of new goodies, which is what I’m discussing today.

The current crop of logo covered goodies has been an ever changing journey, as with most branding, and so today I’m talking you on a trip of business cards and current goodies, while next week you’ll see pretty much everything else I’ve bought.

My shopping addiction started way back in 2011 when I decided to buy cards under my first author name of Lady Jewels Diva. I had not only trade marked that name, but the Lady is actually a royal title that I bought. And yes, it’s real. There were two varieties. One plain, and one double-sided. 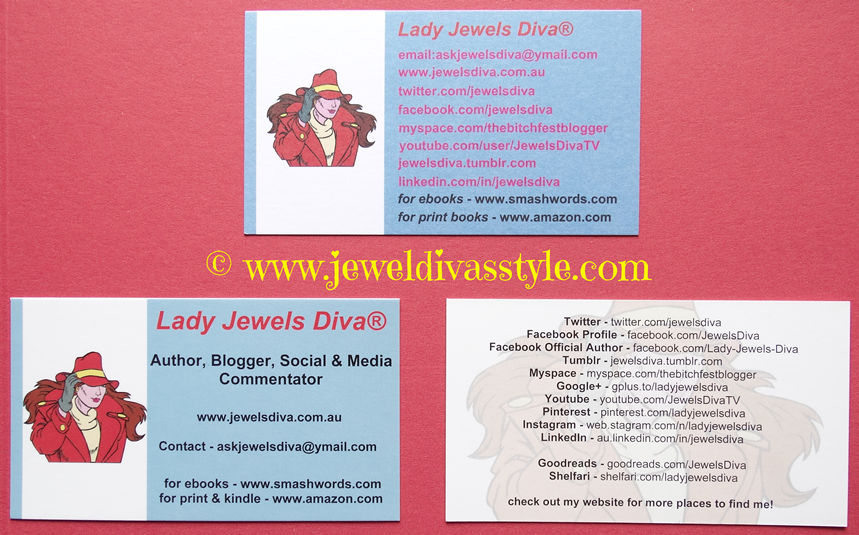 Next came my blog/jewellery business logos and business cards.

The tops ones were done elsewhere in 2008/9, but were the original Jewel Divas business/shipping cards. What followed were Vistaprint double-sided cards with their own pictures, first, with the jewellery business on one side and the blog on the other in 2012. I LOVED those pics Vista had, both suited me so much. The last two are shipping cards done in 2012/13. 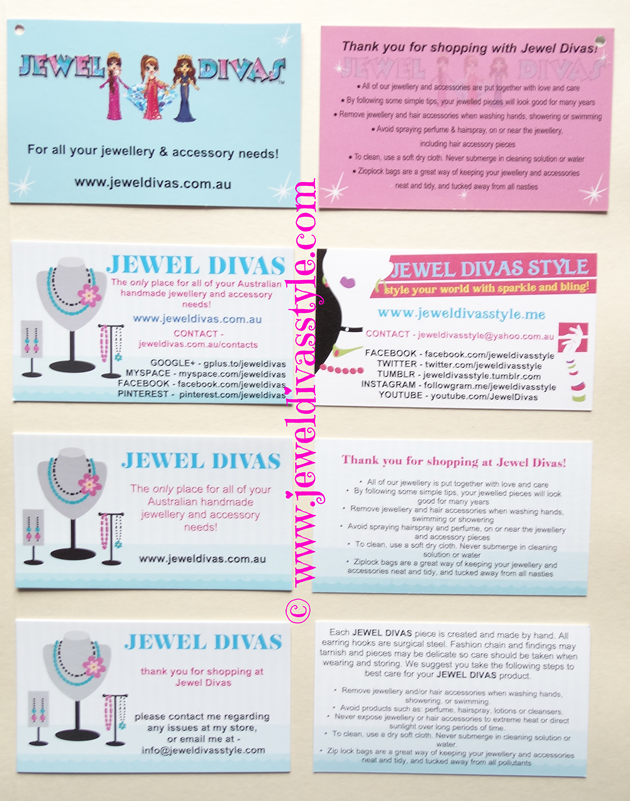 Then came cards in my name. Always double-sided, always with as much info I could put on them, and always ever changing. Especially the taglines, which became shorter. There were six of the old ones, and the new one now makes seven. You’ll see that in a moment.

#1 came in 2013 and was also a blog/jewellery card. I figured having all of my details on them was important. #2 was done in 2014 and I went with the mysterious double identity idea, of by day and by night. #3 was from 2016 when my jewellery business was still the main part of my business. Little did I know that was going to change. #4 was done in 2018 and you’ll see that I decided to go with a quirky tagline for myself. I still think it’s quite a good one even though I don’t use it. 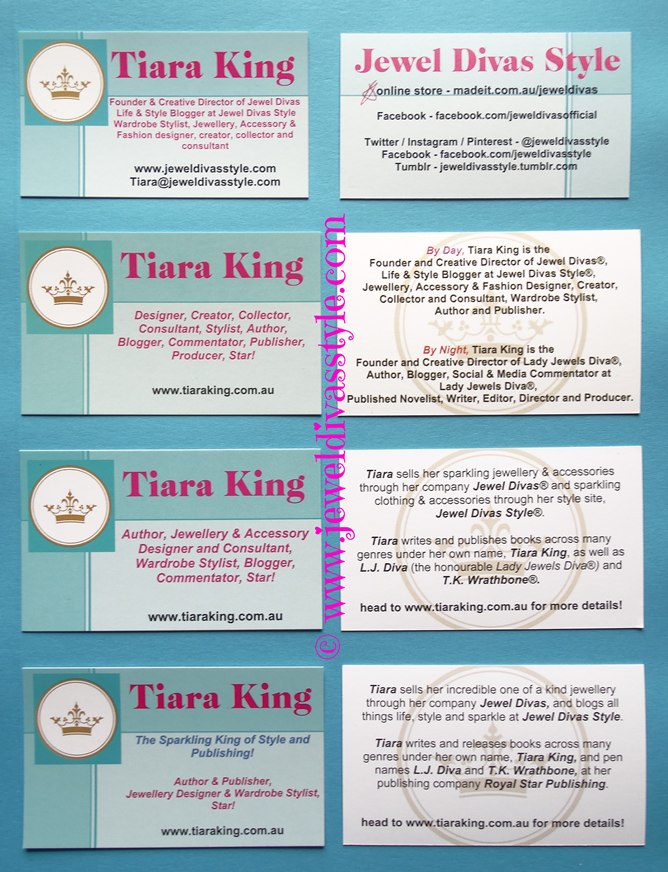 The Sparkling King of Style and Publishing!

#5 and #6 were both done in 2019 and were basically the same, except for the changing around of the back blurb. I put my publishing life on top of the card and moved my jewellery life to the bottom as it was no longer the priority. I also updated my tagline and font. 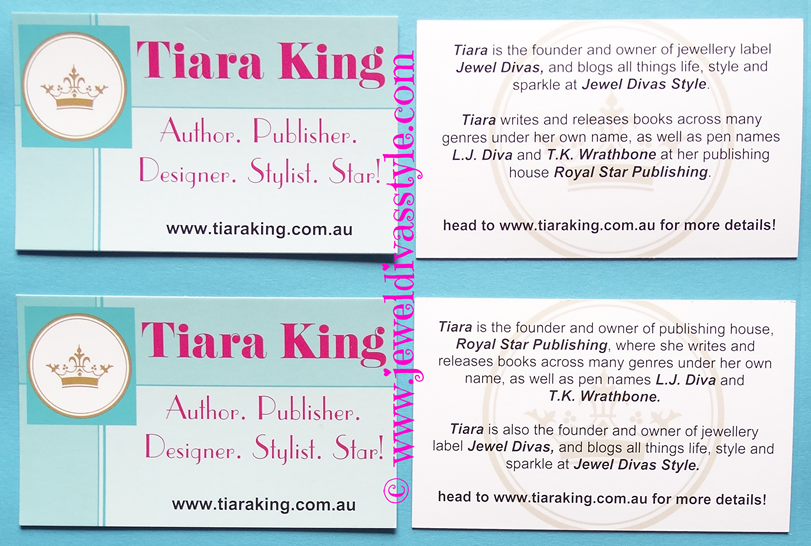 And then I had a new logo made… 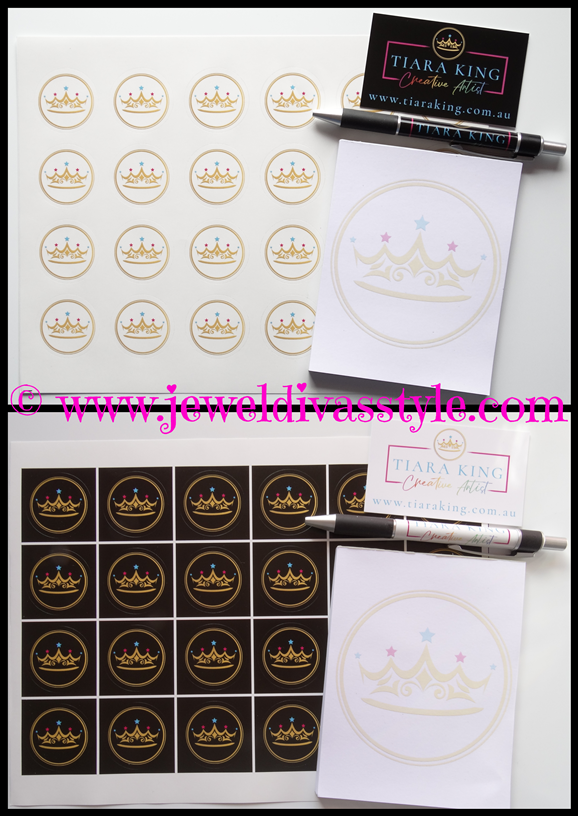 So these goodies are basically what I’ll be stocking up on. It’s just a pity Vistaprint doesn’t know how to cut notepads to the right length. 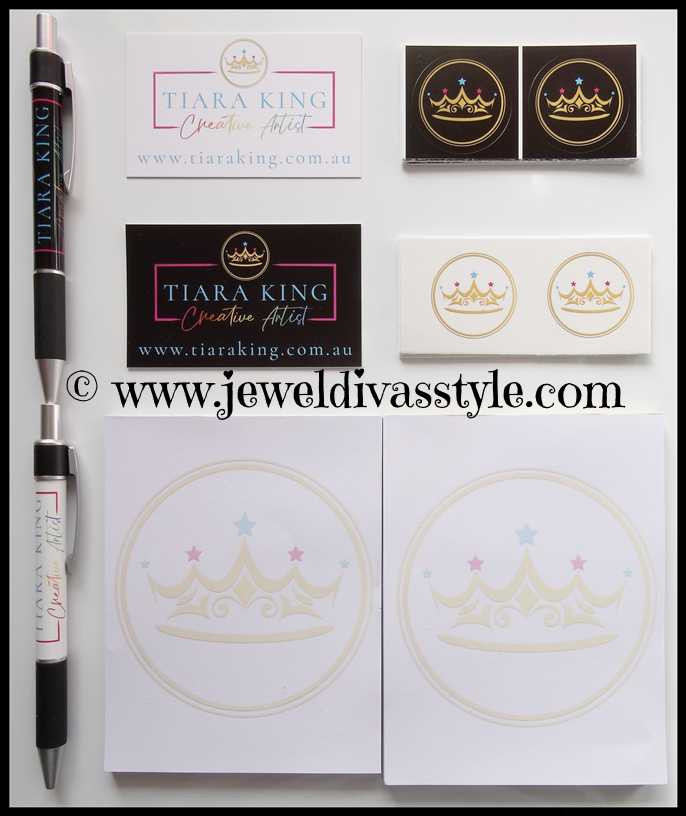 At this point I’m not looking to get too much done. I’m thinking about a mouse pad and poster, but don’t think I want to go down the route of EVERYTHING I did the last time, but you’ll see that next week.

Meanwhile, I needed to find business card holders, and after having a look around my rooms, I found my tropical sunglass cases that were doing nothing except sitting there looking pretty. So, they now sit on my bookcase with MY books and are easy to see and reach. 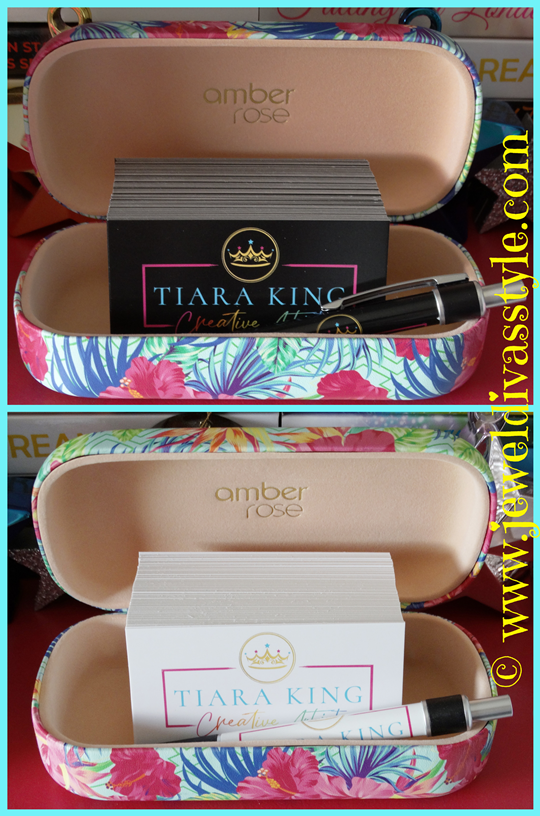 Next week you’ll see the bags, t-shirts, key rings, and everything I’ve had made over the last decade.

What have you guys stocked up on from Vistaprint or other printing companies?