What goes at the top of a cupboard or bookshelf?

And what I’ve put up there has changed over the years.

I’ve had my old bookcase since the 80s. It came from my sister and would always contain many things. My five Nancy Drew books at the time and the growing collection that came after them, my stereo systems, other books, knick knacks, etc. But as the years have worn on what went INTO the bookcase changed, and so did the items that went ONTO the top of the bookcase.

It’s like an ever-changing beast. Always on the move, always morphing into something else.

Back in the old days, before 2016, I had some Nancy Drew collectibles on the top as most of my collection was IN the bookcase. And then, in 2016, I started collecting Jackie Collins books, so Nancy came out of the top shelf and in went Jackie. Nancy still had reign over the top of the cupboard though, until I wanted a place to store the books I was producing in bulk.

As I previously mentioned in the last makeover posts, I changed bookcases in January 2018. I had switched out Nancy for my books by then, and once the new cupboards were in place, stored them the way I did in the picture below.

Now while all of this was happening, I’d gone and bought a pink kid’s shelving unit and put that on top of my tall boy which is between my built-in wardrobe and the new bookcases. I found some pink sparkly kid’s storage boxes from Kmart, and set this up below for my burgeoning folio collection. 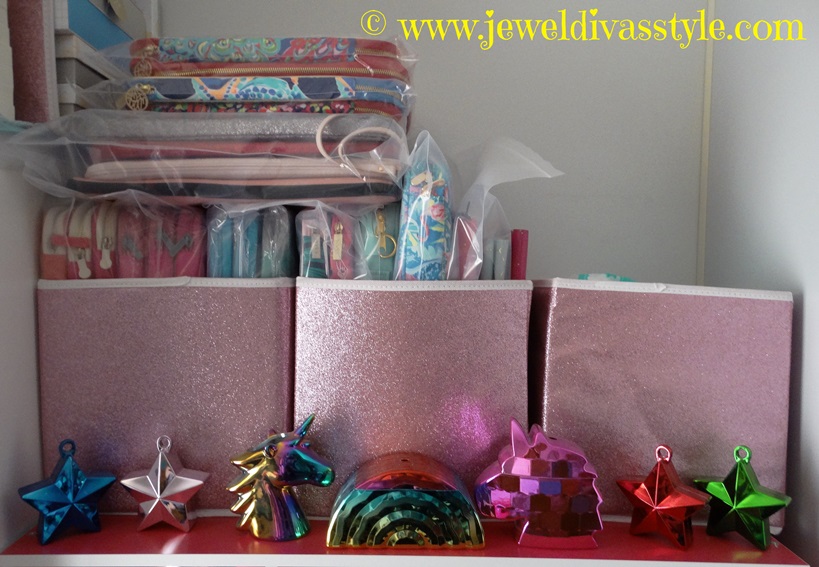 At some point I realised that I was buying way too many folios (said no one ever), and I knew I needed to re-organise everything AGAIN. So the pink sparkly boxes were moved to the top of the bookcases and have had several incarnations since.

They went from this… 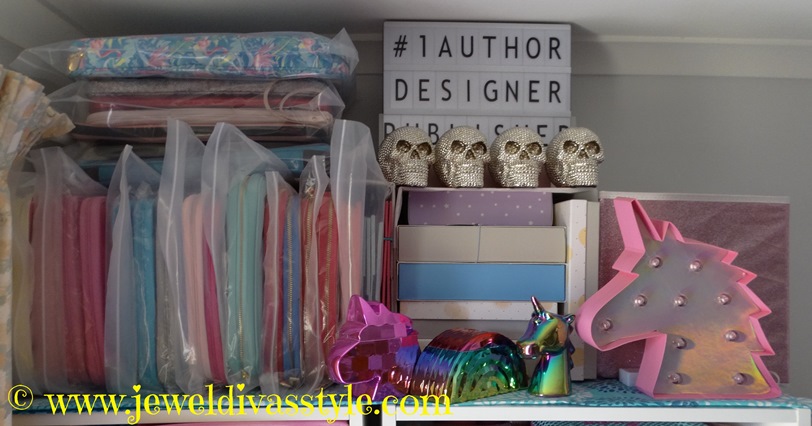 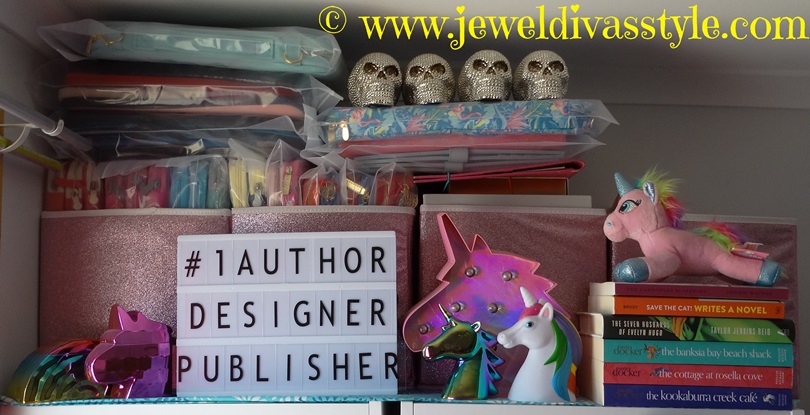 To this during the great overhaul of 2020… 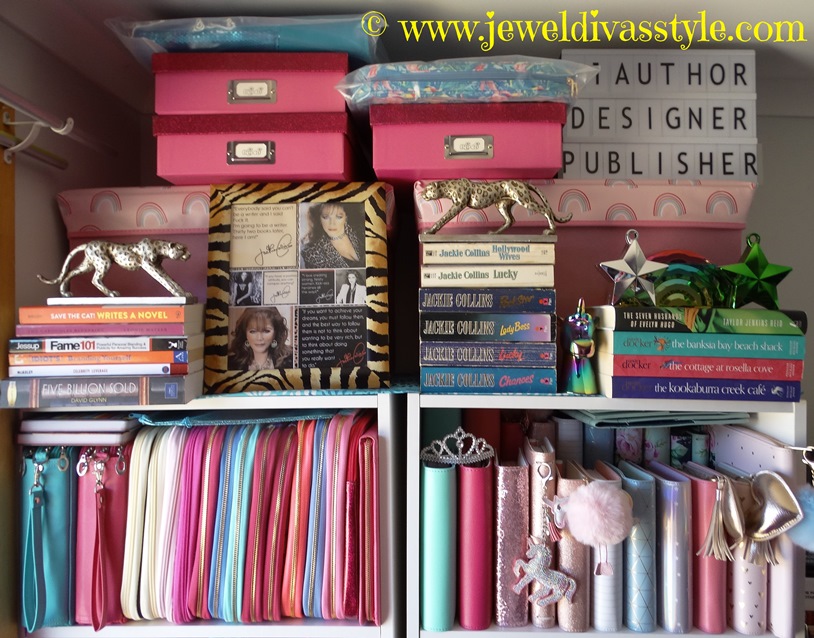 Since I’d packed up most of my Jackie books, I left out the most important titles along with the montage photo I made. Chances, Lucky, Lady Boss, Rock Star, and two of my favourite covers with jewels. Those titles have meaning for anyone in life. One needs to take CHANCES, be LUCKY, be a LADY BOSS, and be their own ROCK STAR. They’re also my favourite UK Pan Macmillan 80s covers.

I also have a pile of business books to the left, and pretty covered books to the right. Or as I like to call them all, the BUSINESS, the PRETTY, and the BOSS!

I switched out the pink sparkly boxes for pretty boxes with lids (that would be two of the rainbow boxes below, from Kmart for $9 each), but I also moved some of my folios to the top shelf (I was hoping to stand them so I could see their coloured spines, but they’re too tall to fit and even though I moved that shelf down, they still wouldn’t fit, so they’re horizontal on the shelf) and moved the pink glitter stationery boxes from the shelf to the top of the boxes. The boxes are still full with folios, I have that many. 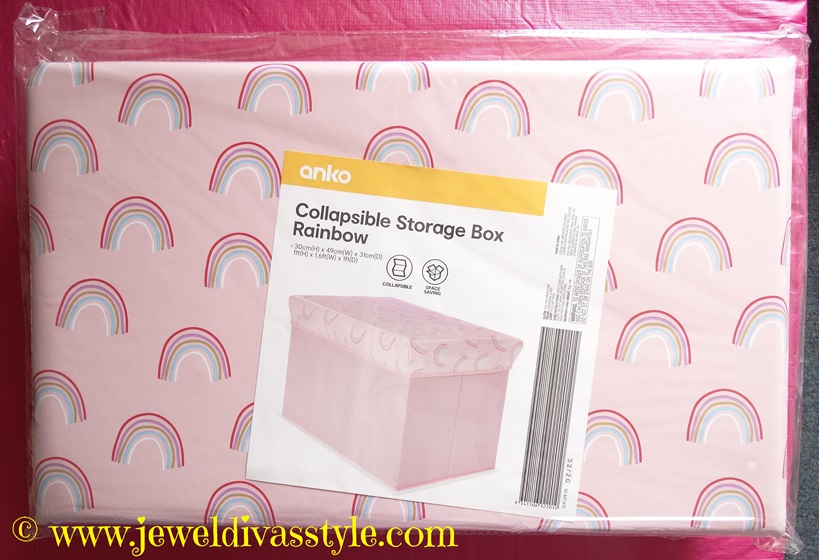 And so…what happened to all of MY books, you ask…?

Well, maybe you’re not asking, but here they are anyway. They were moved to the pink cupboard on top of my tallboy, all displayed by author name, with knick knacks I found around the house, or had previously bought that fits with the themes of the books. 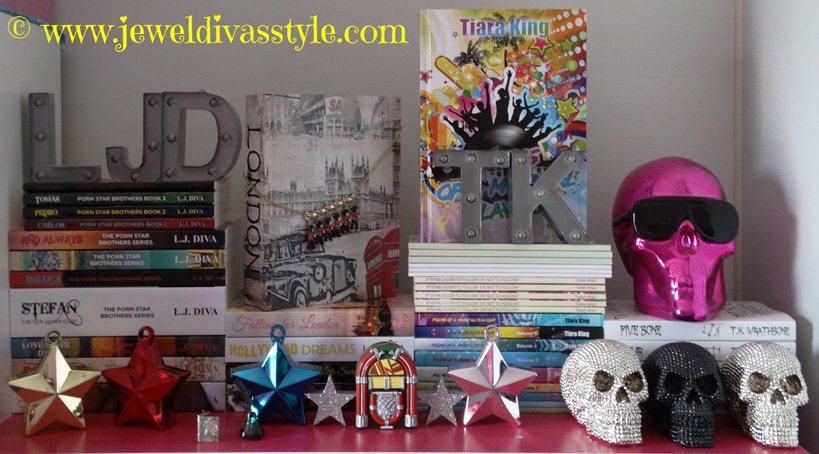 My adult books take up the most amount of space, followed by my Poems and non-fiction, and then my kids books. I think the ornaments say it all, really.

So what’s going on at the top of your cupboards?