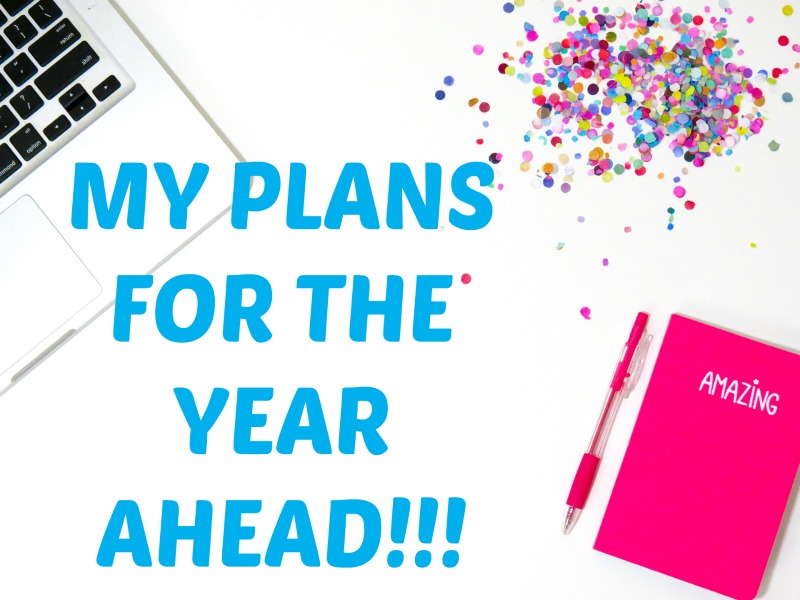 Here they are, my plans for the year, in full…

I’m going to continue the theme I started last year and post a full list of things to do. Much of it is just a continuance from last year, so the list is shorter as it’s not so descriptive.  It’s also longer than my actual writing/publishing lists as seen last week, but then health and what-not didn’t need to be on those lists. Here we go…

– Get my weight under control. It’s an ongoing thing for middle-aged peeps…and I’m considering seeing Gym to help out.

– Continue sorting out my nail issues (not really getting better)

– THIS IS A REPEAT FROM LAST YEAR. Try not to get so angry about stupid shit even though I’m angry most of the time over the way my life is. Life is a learning curve for everyone and I really don’t know how some people can just be calm all.the.damn.time! Hence my word of the year way below.

Things still aren’t normal with a certain person and it’s long drained me to the point there’s nothing in the tank and I’m running on the smell of an oily rag, wearing me so thin you could read a newspaper through me. But what the fuck can I really do about it? Not a lot apparently, as it’s still happening this year.

– Continue to rein in spending. I can generally stick to my credit card monthly max, which means I can buy more Nancy Drews…and folios…

I will continue trying to change how I do things by looking for the best business deals. HOWEVER…there are going to be some expenses this year I cannot avoid, so they are being added to the budget.

– I still know from last year, and the five years before that, that the website may never be up and running again, but it’s something I wish for every year due to the amount of items I have for sale.

Continue to find that medium between blogging, writing/publishing, and time off. I sort of managed it last year, and as far as I’m concerned, want to keep it going this year.

Jewel Divas Style is still my primary blog and L.J. Diva and T.K. Wrathbone still get their once a month posts except when it comes to new releases.

I will continue to take a day off here and there, to log off work most nights around 10:30pm, and to potter around occasionally, only using one to two days at the end of the month to do the next month’s blog posts. I’ll keep posting to social media weekly and commenting on other blogs a bit more.

My main goals were not achieved last year, but I’m hoping to have them done by March-May at the latest, this year. And they are…

– Mailing lists for my books, and newsletters set up on my websites. It will be slow going and I’ll need to write reader magnets for them as well. It seems daunting at the moment, as I STILL don’t have the time to sort it all out.

– Last year I wanted to makeover the websites for Tiara King, T.K. Wrathbone and Royal Star Publishing. It didn’t happen, BUT, I’m looking at a couple of templates for TK and am considering doing it in May in time for my birthday, and hopefully, the release of my books in hardcover. I see how I want it in my head, and know the layout, and pages, it’s just a matter of finding something to accommodate what I see and finding someone to install for me so I can tweak the colours and pictures. I decided on the next theme for TKW and have changed it over, but there’s a few niggly issues going forward in the backend so I’m not sure how long I’ll keep that theme, and RSP will be getting a publisher themed template at some point, hopefully. I realised that trying to do all of them in one month with everything else going on just isn’t going to happen. October 30 is the deadline for all three.

– Move my hosting/domain names to another company to save on money. I have seven c-panels, six websites, and many domain names, I need to save where I can.

And all of that leads me to my writing schedule…

This year I was hoping there would be less to do on the writing front…but that’s just not going to happen.

– Get last year’s AND this year’s instalments of the T.K. Wrathbone stories written, typed up, edited and released by October at the latest as e-books, and hopefully the print formats as well.

Due to a lot of reasons, (and no, covid wasn’t one of them), mainly being so damn tired all the time and not having any inspiration for writing kid’s stories, last year’s stories just weren’t written, and that’s not good enough in my book. So that’s 6 stories and 10 short stories that need to be written. Plus four print formats times two. FUCK!

– Release ALL of the current TKW books in large print, casebound hard covers and dust jacket hardcovers. That’s 1 through 5, and hopefully it will be April 20th.

– Release the Poems Of A Musical Flavour series in casebound hardcover, along with #teenblogger in casebound and large print paperback, and the release date should be May 21st.

– LEARN NOT TO LEAVE EVERYTHING UNTIL THE END OF THE YEAR!

So the plan is STILL to utilise all long weekends throughout the year to get through paperwork and make sure everything is updated. I didn’t manage that last year, but I’m going to try and give it a damn good go this year.

AND NOW FOR MY WORD FOR THE YEAR…

Last year, everyone was talking about “pivot”. Which I personally thought was rubbish as many business should have already been doing home delivery and take away as part of their business anyway, so it was hardly a pivot for many. Just a side step, really.

But this year, so much has already happened personally, which I won’t mention due to family members secretly reading my blog for information, but let me say, shit already hit the fan by the end of the first week of January. And now, it’s barely the second week of February (as I write this) and I’m in need of getting TWO laptops repaired as I think Firefox downloaded malware or viruses. So expenses I can’t afford, many a tear being shed in frustration, and time and energy being wasted trying to fix crashing computers. I’ve been headachy, pissed off, and swollen. Not a good combination.

And then a thought came to me. Just deal with it. Take everything in stride and just get shit done.

So that’s my word for the year. With everything that needs doing, as mentioned above, and you’ll see the bullet point list next time, I just have to take this year in STRIDE, waste no energy on it, and get the shit done. 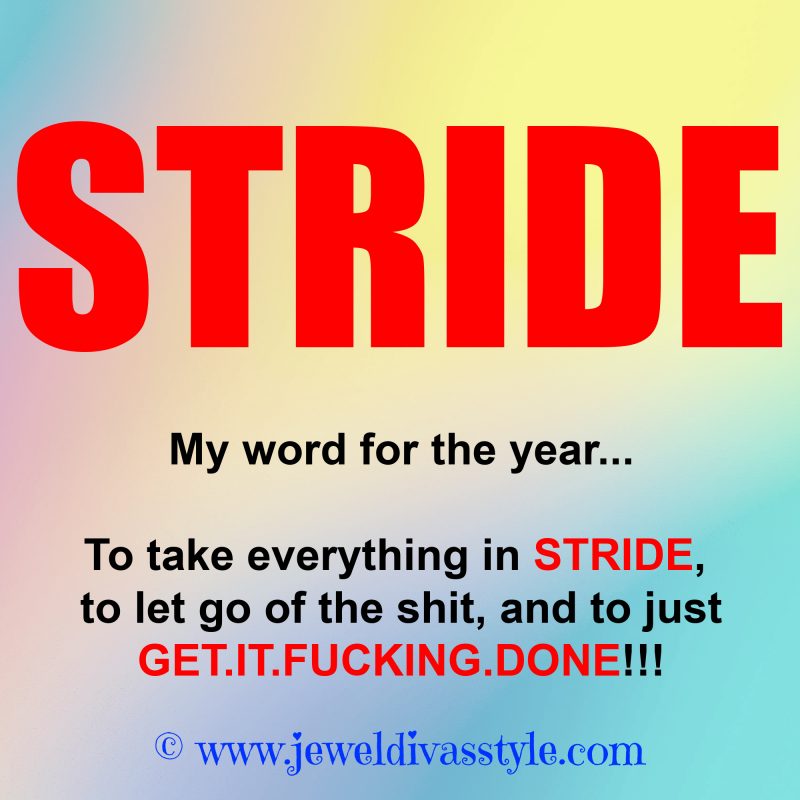 So, that’s the long list, and my word for the year. Next time, the short, bullet point list without the bullets!