Here’s a little backstory on my office.

It used to be my bedroom.

We have three bedrooms, two at the front of the house, one at the back. I had the “second” bedroom which has a built-in wardrobe from the previous tenant. The “third” bedroom was the resident spare room. Going on for ten years ago, mum suggested I change rooms to give myself more room.

She wishes she hadn’t done that, but blames me for taking over two rooms anyway.

So I switched out rooms when I got my new bed, and my old bedroom became my office/closet/spare room. It still has my clothes and my tallboy, but also has an old kitchen table which I use for a desk, along with all of the junk that was in the spare room, plus my copious amount of books that are packed away plus a million other things all packed, racked and stacked. And slowly, it’s had a freshen up.

In late 2017 I bought new bookcases, which I assembled in early Jan 2018, and moved my old one to my “new” bedroom. Two rooms were completely reorganised and changed around. It was a back breaker, let me tell you.

But since those new bookcases came along, I’ve been slowly changing other things. Like the curtains which I found last year and couldn’t wait to hang them. A sparkly mesh center curtain, with two layers of pink toned curtains over them. When the sun is shining and the curtains are closed, the whole room is a warm pink and quite an eye-bender. And as you can see, it matches my table cloth. 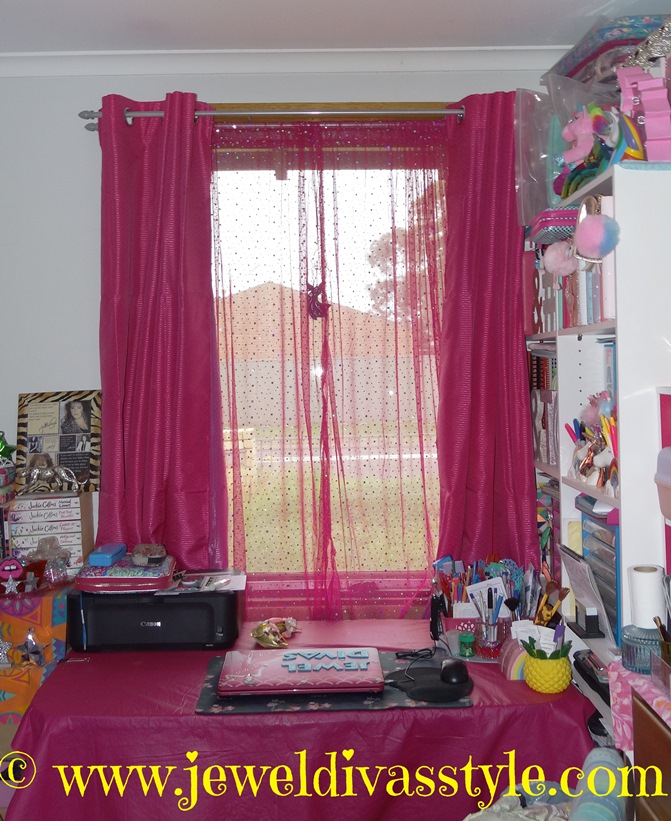 Also during last year, I started collecting the boxes I received when buying goodies on eBay. They were good, big boxes and I knew they’d come in handy for re-organising my monstrous book collection which I talked about last month. That meant by December, the room was C.L.O.G.G.E.D.

Here are the before pictures.

From the doorway looking in. 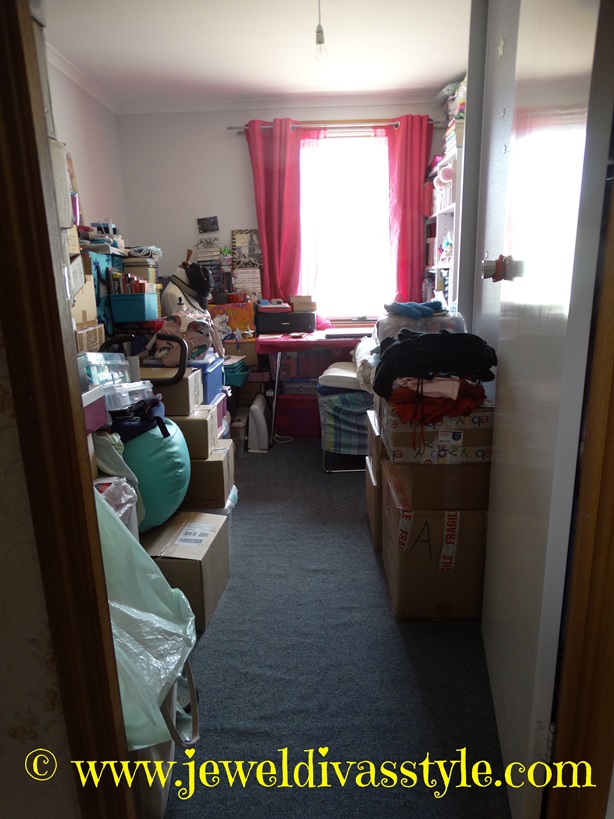 From inside looking towards the door. 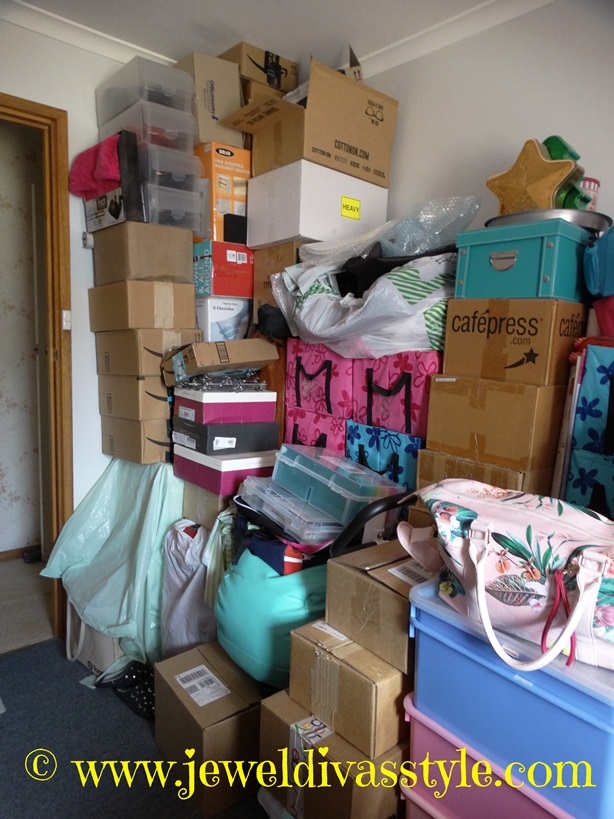 From the inside towards the middle. 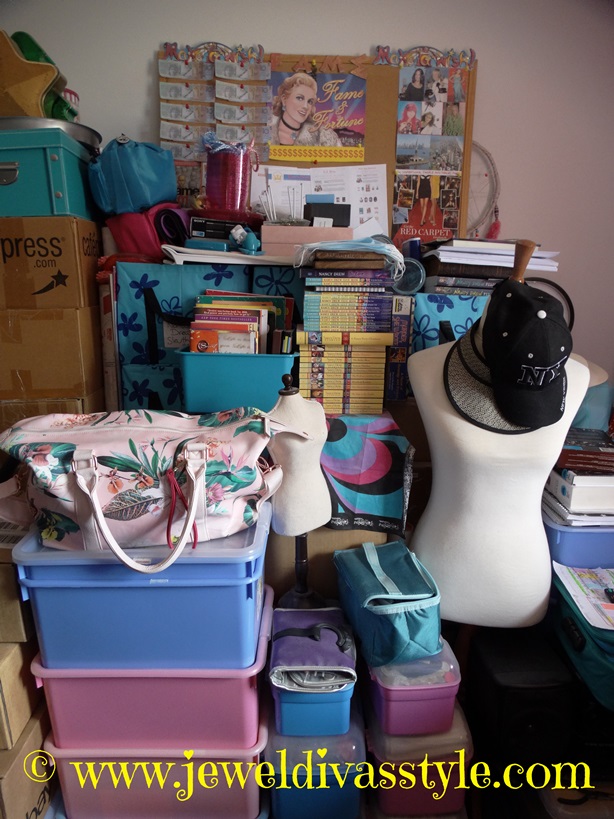 From the inside looking towards the desk/window.

Under the table was a mess of containers. 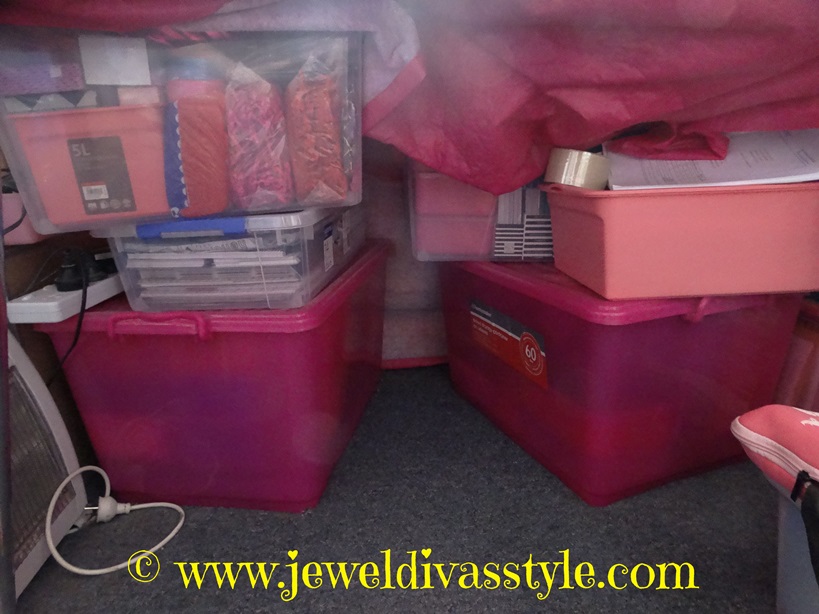 The tallboy, bookcases, table and tv cupboard stayed, along with two trunks that are beside the door, and a couple of the bottom bigger boxes, but the rest of it came out and went into mum’s room, on her bed, the floor, and whatever leftovers there were, came into mine. I had to do that in order to photograph, catalogue, re-pack, re-order, and re-organise all of the books and collectibles.

Here’s the after photos.

Only taken a couple of weeks ago as all of the leftover crap that was sitting around on top of the boxes and containers has taken months to sort through. I used to liken it all to an unfinished cake. The cake itself was done, but the icing was crap and needed smoothing.

From the doorway looking in. Could still be considered a mess, but then spare rooms are. 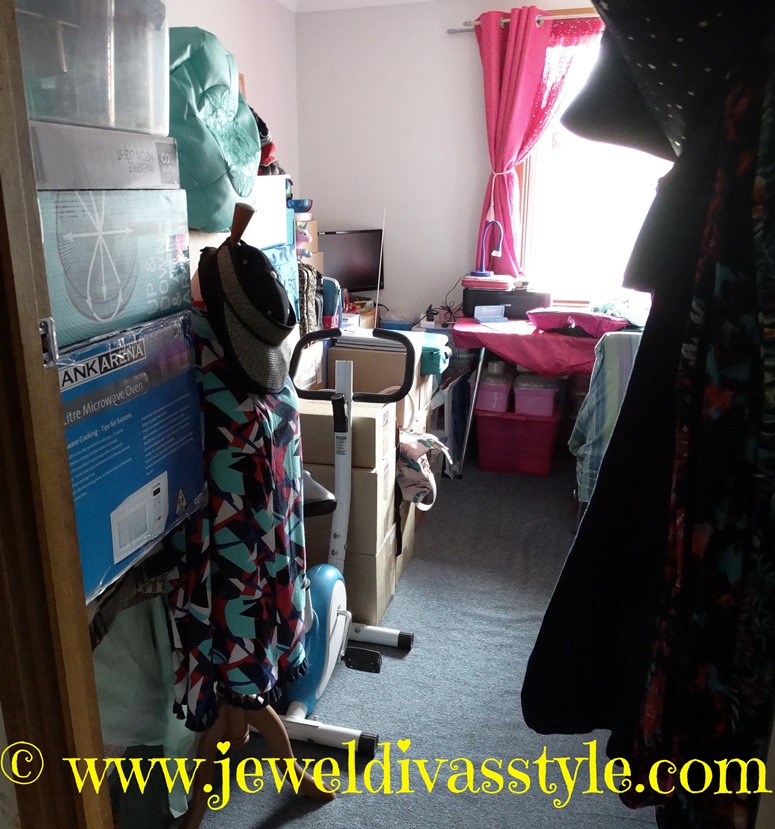 From the inside looking towards the door. At least it’s stacked neatly. 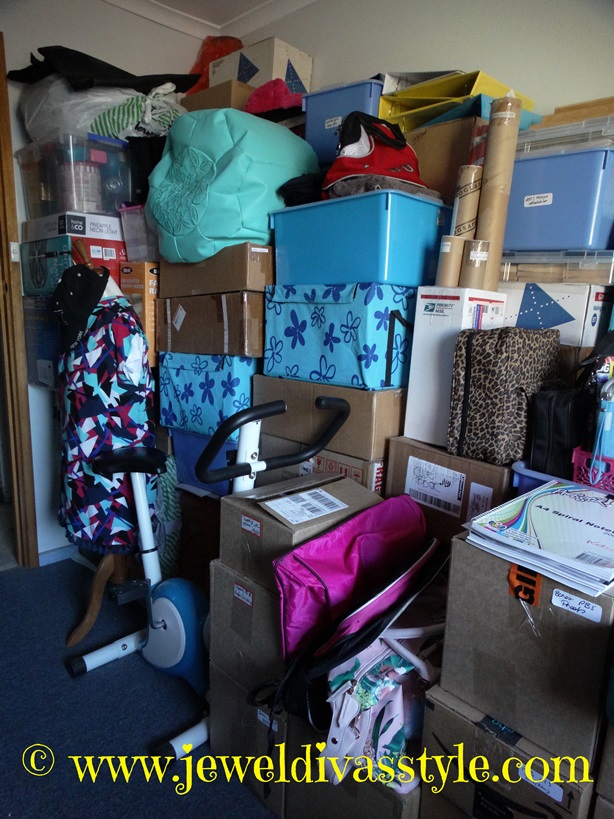 From the inside looking towards the desk/window. A lot neater than before. 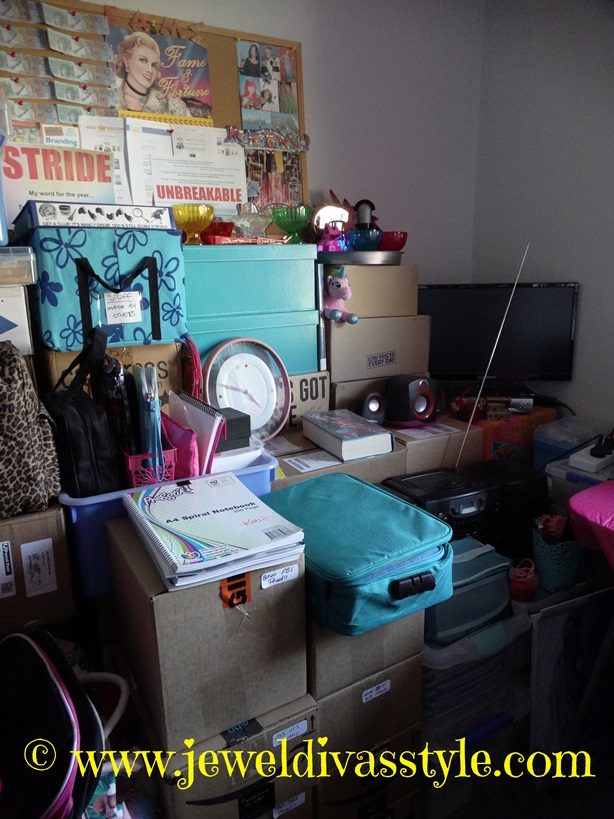 Under the desk was organised to give me more space. Since I’d removed the boxes from between the desk and tv cupboard, it meant I could fit one of the big pink jewellery crates into that space and only keep one under the table. Sistema containers came in handy for re-organising my planner/stationery items. I also re-organised the bottom of the bookcases to fit my bag of book manuscripts into it which meant I had to fit what used to be in there in the actual bedroom. God I wish I had a bigger room, or shelving from floor to ceiling. 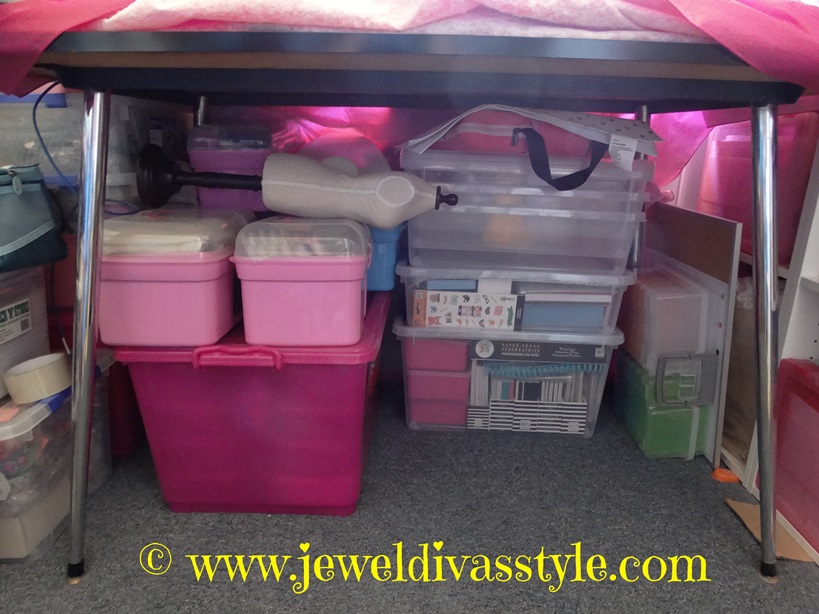 And here’s a closer look at the middle section towards the floor. Why? because I have 11 boxes of MY books that are proofs and/or display books. 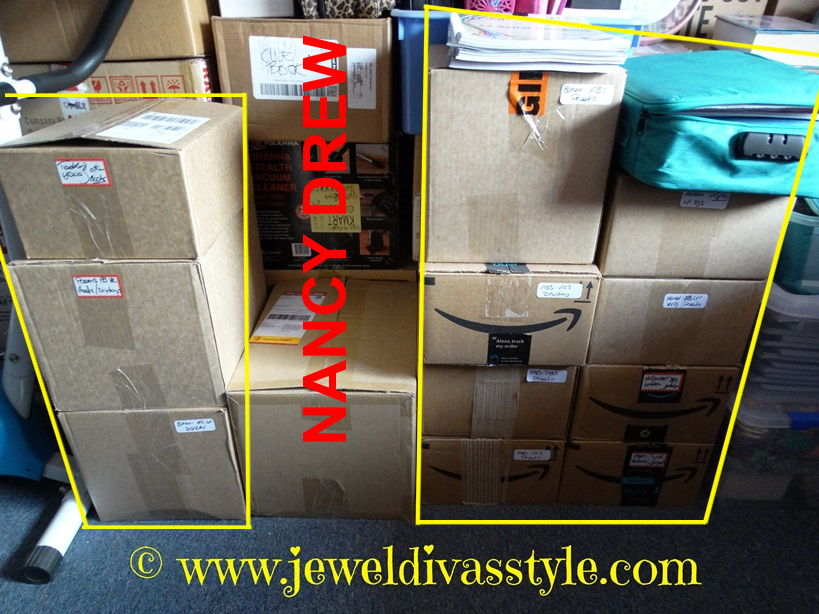 I had to repack them all and fit them somewhere and they surround my box of Nancy Drew folders that used to sit on my old bookcase. But there’s no room for them anymore so into a box they went. That box was between the desk and tv cupboard, but was also moved. And I don’t want to put too much weight on them so my handbag sits there and now my books surround it. I also have notebooks for the next kids stories to write, and that green thing (supposed to be turquoise) on the far right is a luggage travel briefcase I bought off AliExpress, but as it was the wrong colour, I only use it for storing my publishing stuff in, so still book related. All of those boxes sit in front of my Nancy collection.

Well, that’s it. That’s what happened after the monumental book clean out and re-organisation. It had to happen at some point, and I had hoped to do it at the end of 2019, but that obviously didn’t occur. I wish I had floor-to-ceiling shelves and cupboards, I could definitely store everything in one room and have it as a library/writing room. That is a dream, which will more than likely never happen at the rate I’m going. But who knows, maybe once I’m finally on my own, I can decorate a wall or room to suit myself.

Have you guys done up a library/office for yourself?