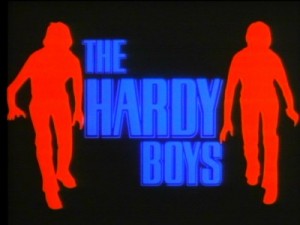 Now as you all know I have a fairly healthy obsession with Nancy Drew. For those who don’t know, Edward Stratemeyer invented Nancy in 1930 and three years before, The Hardy Boys.

I finally managed to get season 3 of The Hardy Boys (just over a year after it came out) with Parker Stevenson and Shaun Cassidy, and watched the schlocky 70s show in glee and despair at the “girl obsessed” overtones.

Oh the first two episodes where Joe gets engaged to his girlfriend goes to show how times have changed. It’s all about him and her and trying to get the guy who did them wrong (I won’t give away spoilers).

The show had to change by season 3. Nancy had left in S2 and now they moved on and made the boys more adult like and responsible. Even the theme music and credits got a groovy update, with Shaun being first of course because he was the bigger celebrity.

I got through the 3 disc set over a few days, three or four episodes on each, with ten in total. It was trippy to watch.