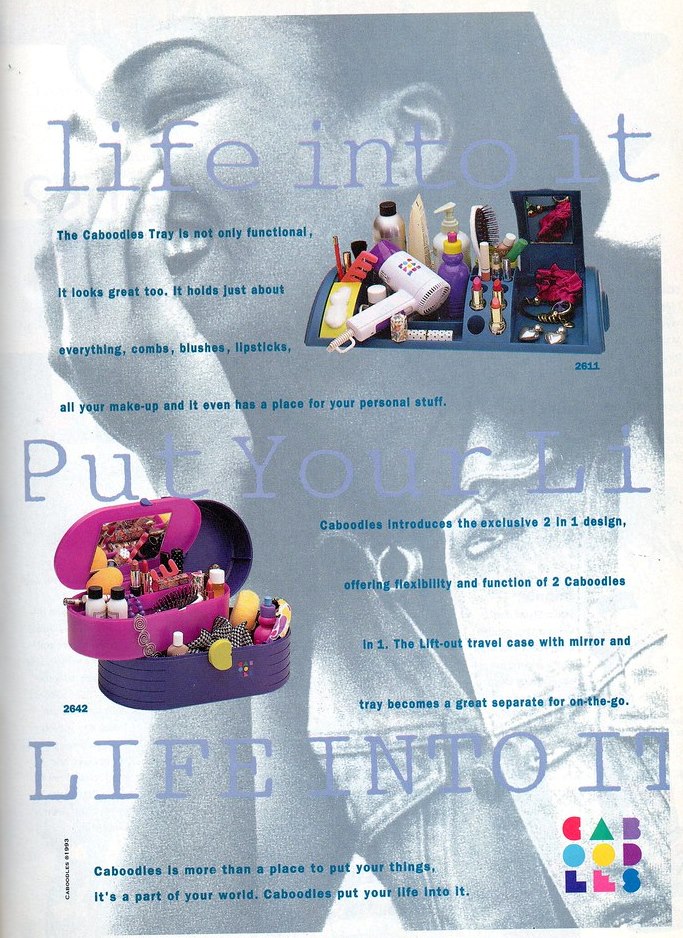 And so we come to part three of my Caboodles collection and all the ones I’ve bought since the last post.

Here is model #2752 in a deep purply blue. I had never seen this shape before, and have no idea what it’s called, but I’d say it came along somewhere between the “Speciality Series” and the “Custom Series”. And if you have the original booklet that came with yours, you’ll know which ones I mean. I call it the UFO, because it has a similar shape. It cost $84.58AUD. 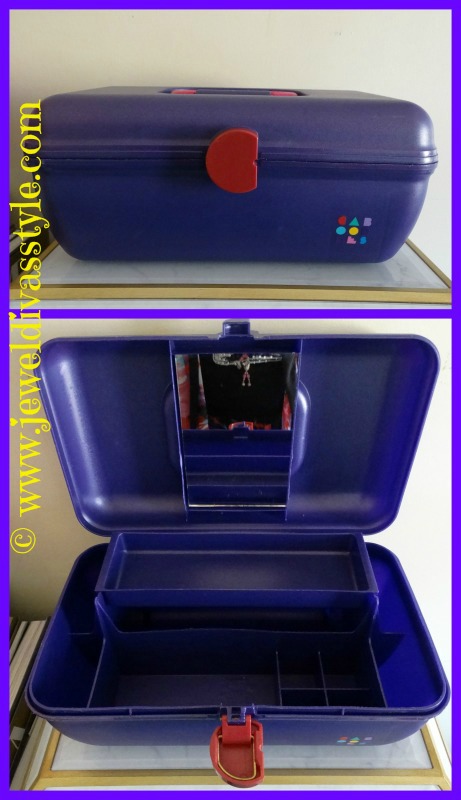 And here we have #2642 and it’s the “Signature 2 in 1 with travel case”. It’s a navy blue with pinky/purple latch and handle and as you can see, the inside comes out. It cost $91.59AUD and there is an alternative version of this which comes with a different shaped travel case and three plastic bottles. 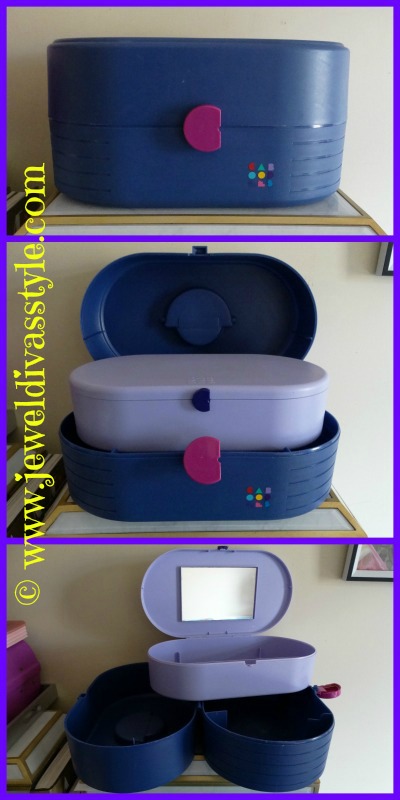 I think this yellow one is from the early days of Caboodles when they came in boxes. It’s double sided, is missing a tray (which pisses me off) and is the large case version of many smaller ones. It has no number or name so I can’t say and cost $83.84AUD.

And then we come to a newer acquisition. The CARE PACK™ & LITTLE BIT™ COMBO PACK which is still available at caboodles.com. Managed to get it via Amazon for about $20AUD. They don’t fit much, but the peach does fit inside the mint. 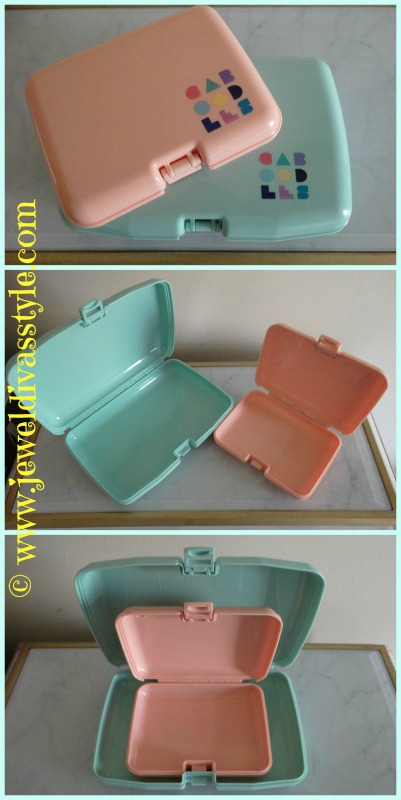 Now, onto the book and some brand new info.

I’ve written up the main info concerning Sassaby as it wasn’t mentioned much. I know Plano is still banging on about how they had the idea for Caboodles and all, and I even made a comment on their Insta page the other week saying how it wasn’t them that came up with the idea, it was Leonie Mateer, but fuck, that would piss me off. 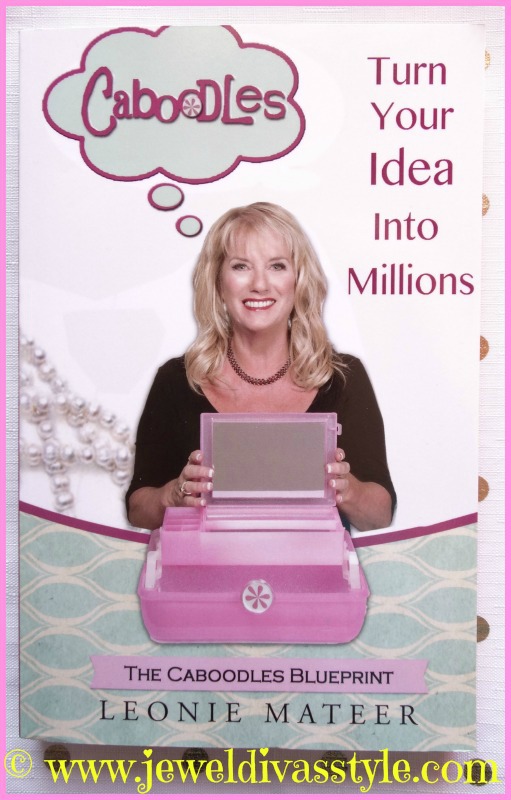 IN 1986 SHE HAD A VISION TO MAKE A FISHING TACKLE BOX INTO A COSMETICS BOX.

Leonie researched all of the manufacturers of fishing tackle boxes and found the major branded ones were made in the USA. She called them up and asked if they were interested in using one of their existing tools to make her product.

The first manufacturer agreed but later reneged. The second, Plano, initially hired her as a consultant to create the line, market and develop the brand, set up the rep force and sell the product to retailers.

Because she didn’t have the capital required to launch a full product line herself, the manufacturer hired her as an employee and immediately took ownership of the brand and products and invested their own money.

As an employee she single-handedly sold over 50 million in sales within three years. She was solely responsible for all product development, brand development, marketing and sales, etc.

That was the birth of Caboodles.

After three years she left and created her own company and continued to create, market and sell branded products.

She says, “Although at the time I “gave away” my product idea, I was given something that money cannot buy. Hands on experience.”

Her next adventure, Sassaby, came along. She found the financial partners first, and did basically the same thing as she had with Plano. Selling over 15 million dollars in the first sixth months of operations, it wasn’t without issues. In her third year there, the company introduce “Jane” cosmetics, and shortly after she left to pursue other things.

Did you know that Sassaby is named after a South African antelope (tsessebe) and the brand name inspired a bright African/animal style logo and graphics?

She became Caboodles first major competition when she started Sassaby and since kids had already been “Caboodlized” she had to come up with something to catch their attention.

Because she had been doing focus groups in classrooms and talking to the teens that used Caboodles, she had a ready-made list of ideas. And because there was this hot new show for teens, their focus groups gave them the edge. They created a national promotion spearheaded by Shannon Doherty telling girls they could win a day on the set and meet the cast. They even had Tori Spelling attending the launch event.

It wasn’t until she’d sold Sassaby to Estee Lauder, that Plano hired her services as an independent contractor to revitalise the Caboodles brand which had suffered a decline after she’d left. The new role was to research emerging trends, product development and everything else. Within a few short months she introduced the “Jellies” Caboodles and the brand took off like wildfire.

They got their inspiration from the kids in the focus groups wearing jelly sandals and shoes. They bought some of the shoes and took them back to Plano and told them to make Caboodles look like that. And they had a winner.

Now, mind you, when you look at the quality of Caboodles now, you can tell it’s not as good, and is either being made in China, or they’re using cheaper plastic. It’s not as thick, strong or durable as the original, and the Caboodles logo is a sticker instead of being stamped on. I’m personally disappointed in the new Caboodles, and will continue buying the older versions. God knows what I’ll do with them though. Mum thinks they’re suitcases I’m keeping my clothes in….

Yeah, weird one, she is.