As you know from various older blog posts, including the very first one here, I have an old pink Sony Vaio that I decorated for my jewellery business as that’s what I bought it for. It looks like this… 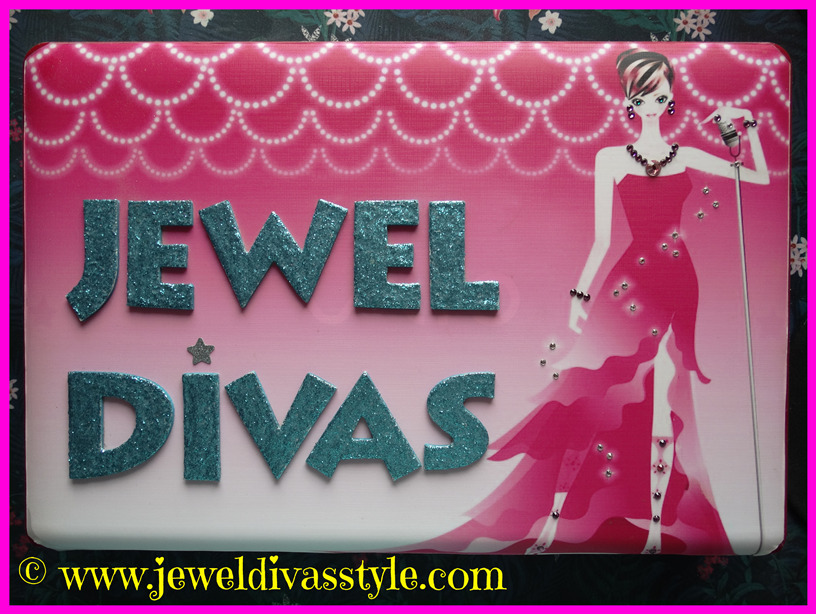 At the beginning of this year with my come back posts, I mentioned that I needed to get Geeks 2U out to check over my laptops. Turns out, my pink Sony Vaio was on its last leg AND its death bed.

I then transferred everything over to my blue Sony Vaio, but that too won’t last much longer. After changing everything over, I proceeded to peel off my glorious Jewel Divas decal in the hope I could keep it as it’s covered in Swarovskis and is pretty damn special. 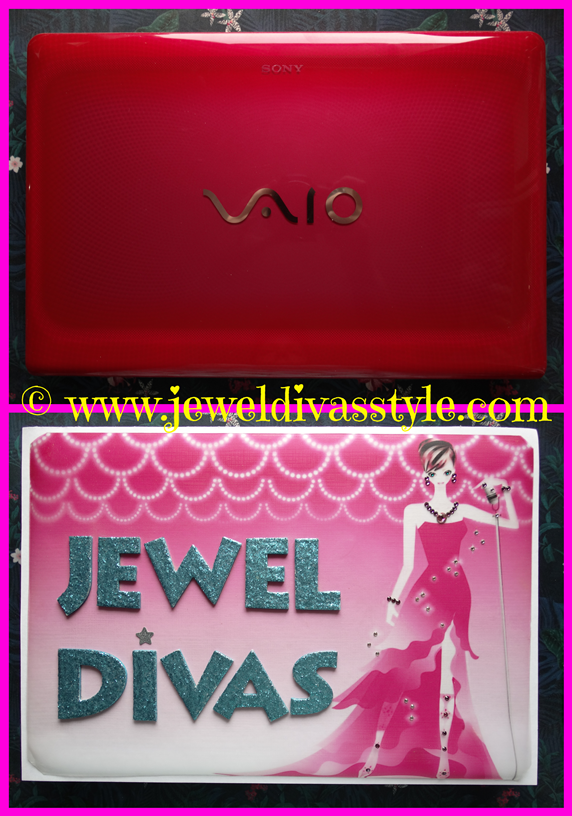 It came off in one piece and I laid it on a white piece of paper. It’s now safely kept in a craft container.

And then I needed to wait for the money to pay for it all. First it came in the form of a yearly carer’s payment I get for looking after mum, and then it came rolling in from book sales.

I’ve received some good money from the sales of my books that I finally released in hardcover and large prints this year, and not just the ones under my name, but my two pen names as well. I added the first batch of money to my carer’s payment and kept it aside.

And then I shopped!

First, I went to JB HIFI and spent a good hour or so looking over laptops, looking at prices, asking the young girl a dozen or so questions. I also asked about all of the extras I might need for other things.

I took photos on my phone and slowly narrowed it down.

I then went home and did a lot of online searching. One criteria was that the brand could not be using bloggers, vloggers, instagrammers, influenzas and reality show pissants to flog their product. So LG was out of the question. It’s also expensive. $3000 for a laptop when their fridges are around $2000. God knows how they figured that pricing out!

One brand that did not have those people all over their socials was Lenovo. Whether or not they’ve used those types of people, I don’t know, but I didn’t see any on their socials, as I did with LG whose every.second.picture.was.of.a.bloody.influenza.flogging.their.product.

So, after checking various online stores, I found a blue laptop… 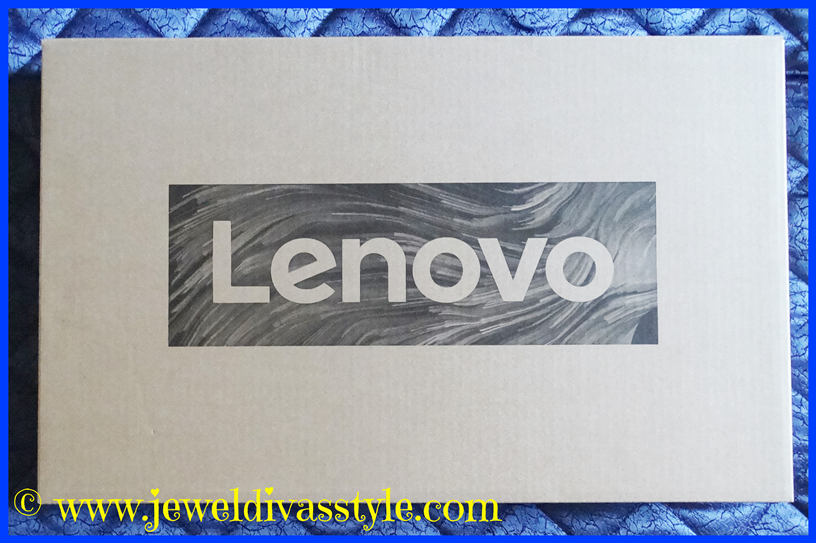 Ha! Got you there.

As I had originally been taken with the Lenovo Gamer laptop, simply because it was blue, but a couple of hundred extra, I found mine on sale and was able to get it. But I also went in search of gamer goodies that I had seen in store.

First, I looked at a variety of stores, including JB HIFI, and then, for some reason, decided to check the Kmart website to see what they had, as I also need a new keyboard to hammer out my future stories.

And what did I find?

So I bought up big! 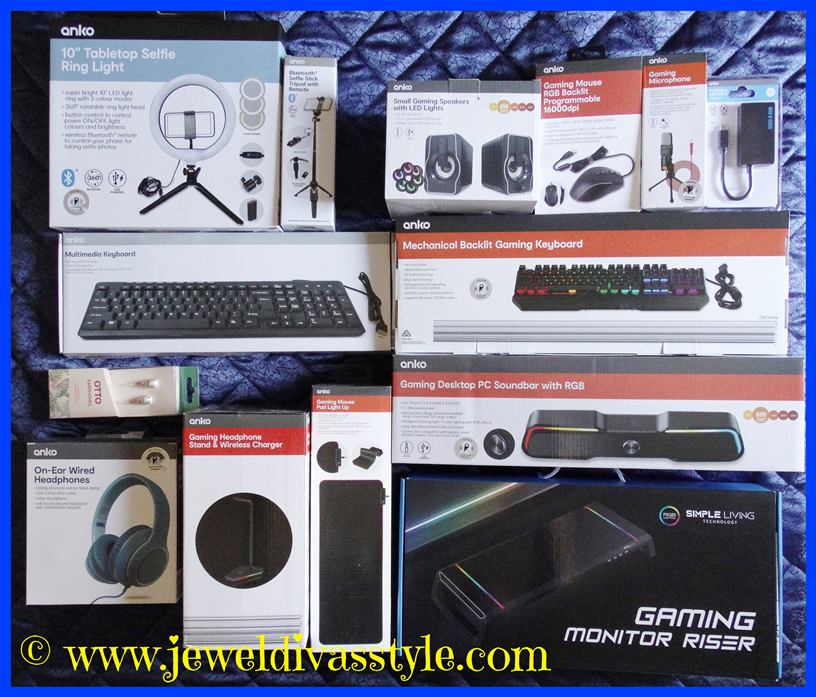 As you can see, there’s plain and gamer keyboards, mouse and mousepad, monitor riser, two headphones, a headphone stand, microphone, soundbar, sound speakers, selfie stick and round light, plus a cord connector to help hook everything up.

Here’s the break down in prices.

Kmart – Plain – keyboard $7.50 (yep, the same ones that are more expensive in other stores are this cheap)

I also bought a few other things I needed while I could afford it (not in the picture).

Kmart – plugin laptop light $5, small camp table to use as a riser $10. Yep, I bought a small camp table because it’s higher and wider than the gaming riser, and sometimes, you just need to get your pc/monitor up higher.

I did a quick set up to take pictures… 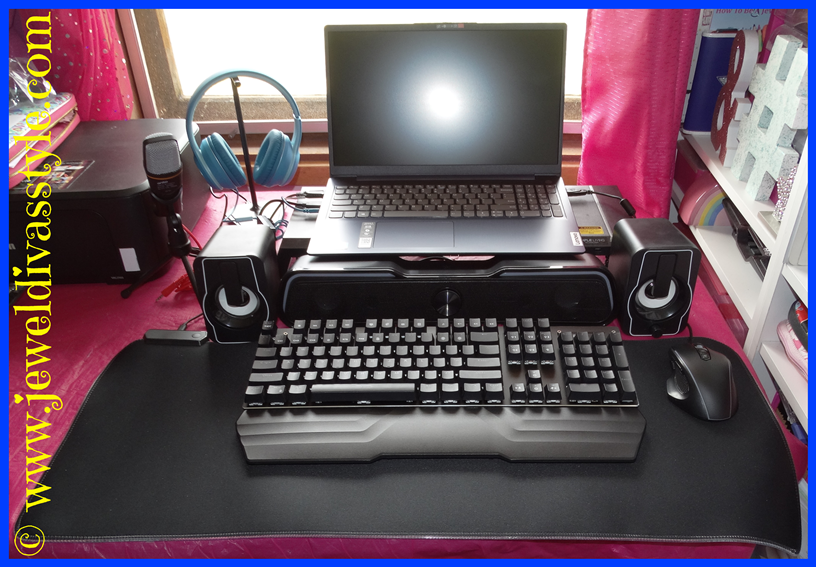 There are a hell of a lot of cords jammed under the riser and behind the soundbar, so I’ll have to sort it out over Christmas.

Here they are in the dark, because, hey, GAMER ACCESSORIES LIGHT UP!

You can just see the headphone stand lit up at the back, in the top pic. This microphone doesn’t light up, but now they have one that does. Bugger! 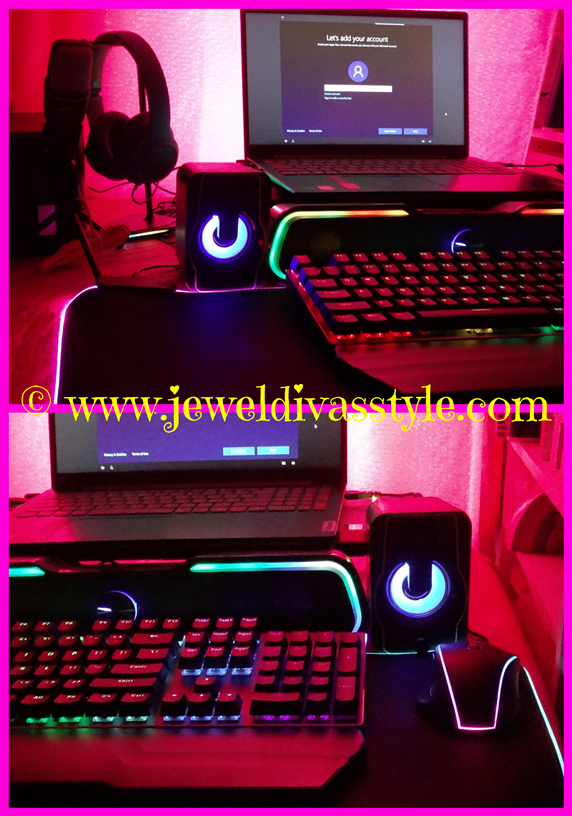 Everything changes colours, including the mouse. This was the cheapest one, but they do have a couple more at higher prices.

So here’s the whole she-bang lit up, except for the microphone. Although…I might also get the other one…just…in…case… 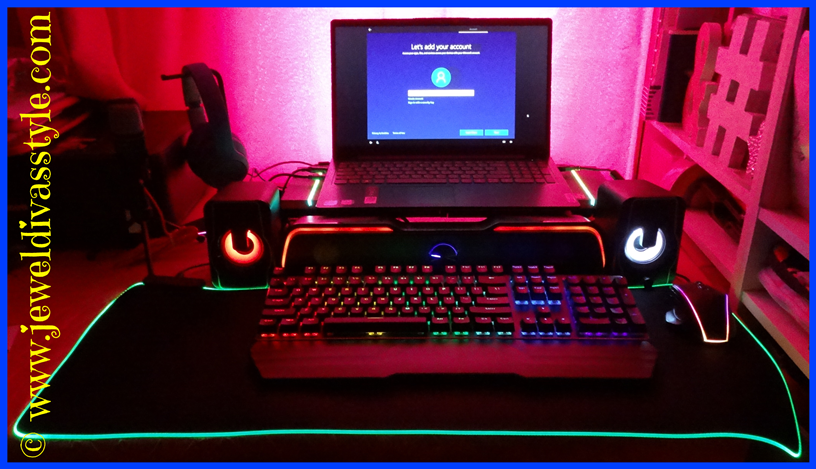 And then I went and bought the light up microphone… 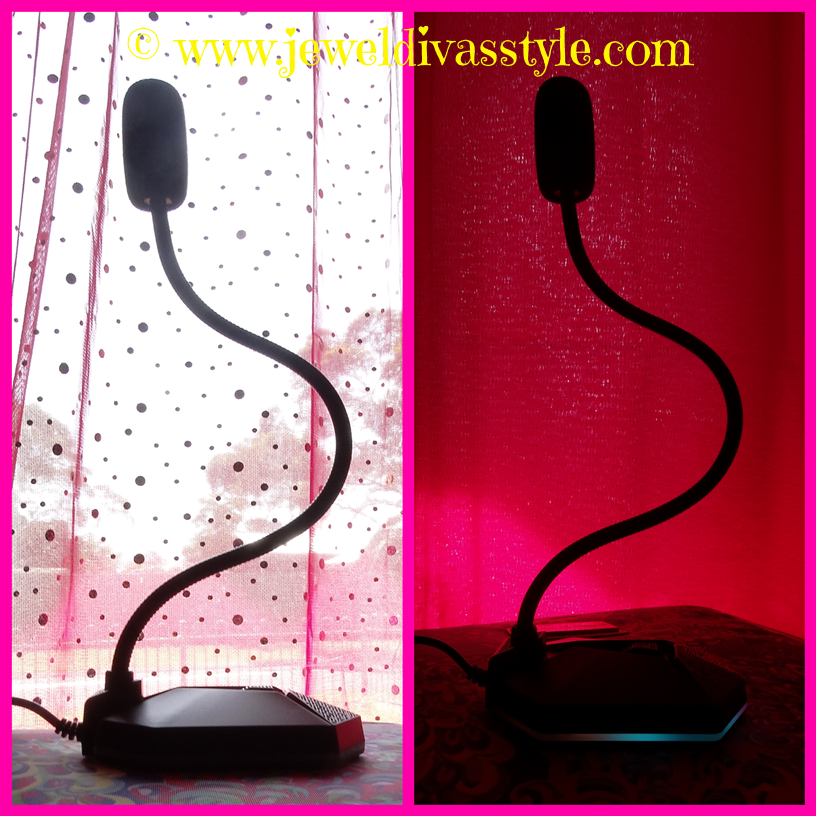 I barely set the laptop up so will need to spend some time over Christmas finishing that off, getting to know the new MS as I’m so used to Windows 7. I also need to save everything to it, and download Dropbox plus a dozen or so apps that I need for writing.

Oi, December’s going to be busy!

As for the pink Vaio, I still have it as I’m not sure what to do with it, and the blue one’s still working at this point.

As for the money from my books, 3/4 went into the bank, and some extra stayed out to pay for other oncoming business expenses, including making a decision on whether to update MS Word or not. I still have 2010, but I’m not sure whether to pay for the one off student, or a yearly sub fee. But I made out well with the rest of these bargains.

What have you guys had to spend money on to update this year?