Back in May of 2008, I bought a copy of “Bead style” magazine that had been imported from America.
On the inside cover I saw a full page ad for a wholesale beads shop and they had three smaller pictures under the big main one.
In the middle were Marcasite charms and findings, and I saw this pendant sitting in the midst of the photo.

Several years later, 2010 I think, Samantha Wills released a ring version called “Gatsby Girl” in black for $75. The exact colour I had seen the pendant in. 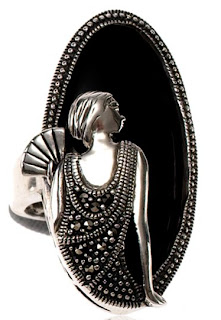 I loved the ring, and so tracked it down on eBay in 2011 in sterling silver for $34.98. The store also sold pendants and earrings. I bought the pendant from another eBay store as it was cheaper. So I had the set of earrings and necklace before even being mentioned by Samantha about her releasing the necklace version as well. I already had mine for $31.38 and so didn’t need to bother with her $79 one. She also released it in rose gold and asphalt.
And then this year I also found it in turquoise and mother of pearl, earrings, necklaces and rings. So I bought the rings. 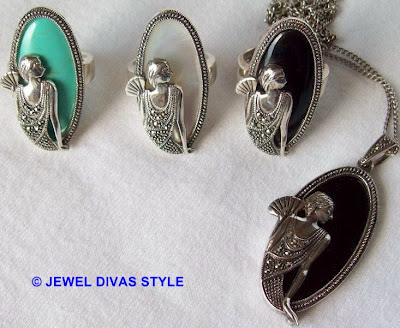 Ebay store SilverNGold was the place I got mine.
It’s easy to get the same pieces when the designer didn’t design it in the first place. Some of us merely use whatever charms and findings we come across for use in our pieces.
The art deco cameo rings look like they were made and used by many.