It’s been a bit of a mad shopping frenzy the last couple of months.

Firstly, it’s our tax time, so end of financial year sales were going on everywhere, especially online. I also shopped at eBay and scored myself some awesome things. This post being about clothing, jewels and accessories.

So here we go…

EBay kaftan top for $27.20 (shipping included as I always count it in the final price). So pretty! 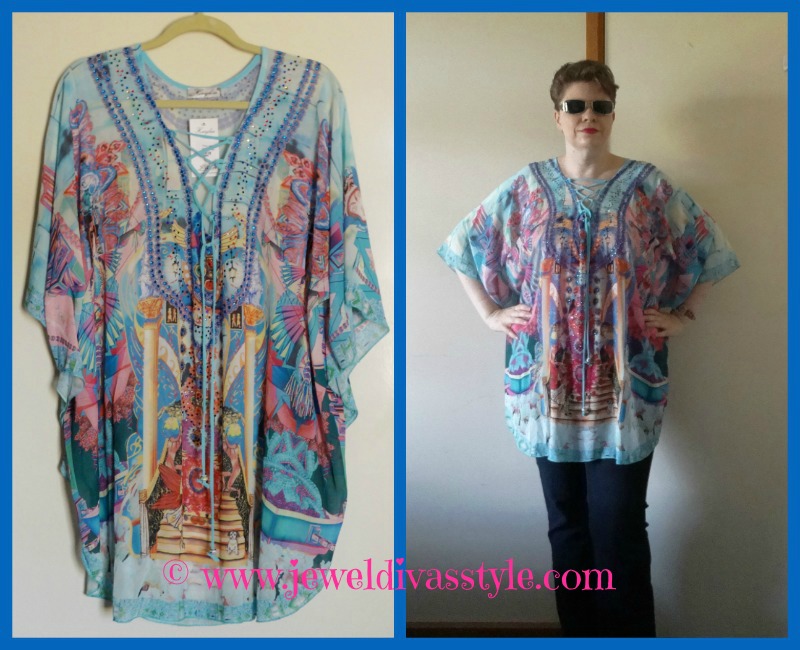 A Katherine Kelly Lang, yep, from The Bold and The Beautiful, Kelly’s Kloset kaftan top, $38.50 from eBay. 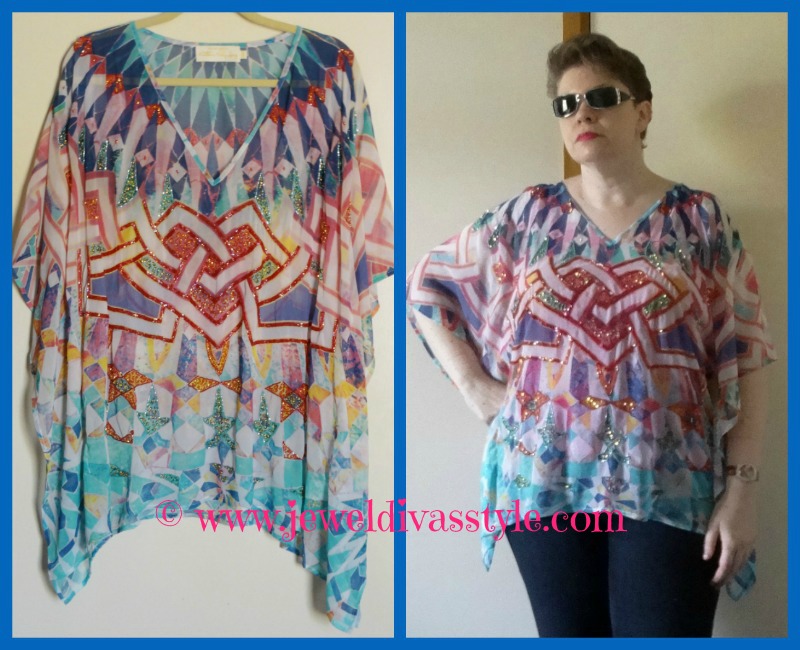 Now we move on to an online store called Czarina. I mentioned in March’s blog post that I was lusting after a few things from the store, and most of it had sold out at that point, but a few things have popped back along the way…so let’s get into it.

A “Escape to Paradise” kaftan top for $111.75. It was already on sale, and then I got even more off with a discount for followers signed up to their newsletter. 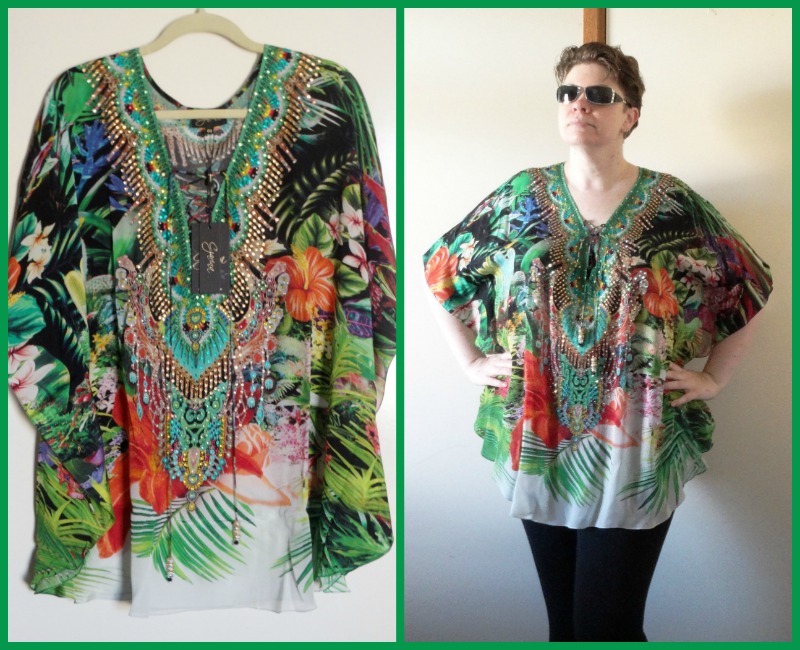 I umed and ahed over these next two jackets, but when they went on sale, and then I got even more of a discount, I couldn’t say no. $205.50 each. This one is considered purple, I’d say it’s more indigo/violet as it can look either blue or purple and is called “Purple Soul”. 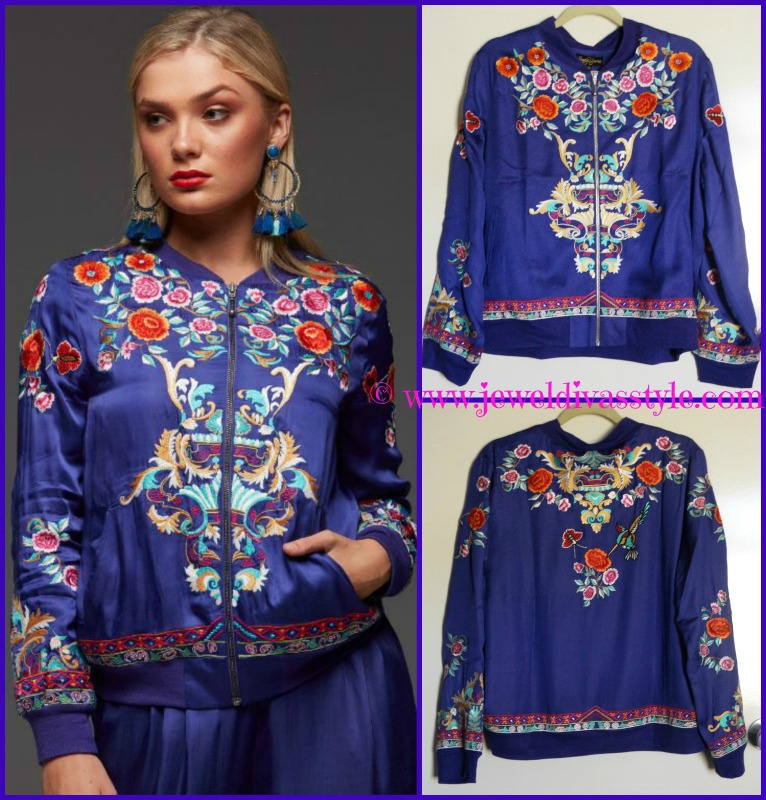 This one is called “Simply Green”. 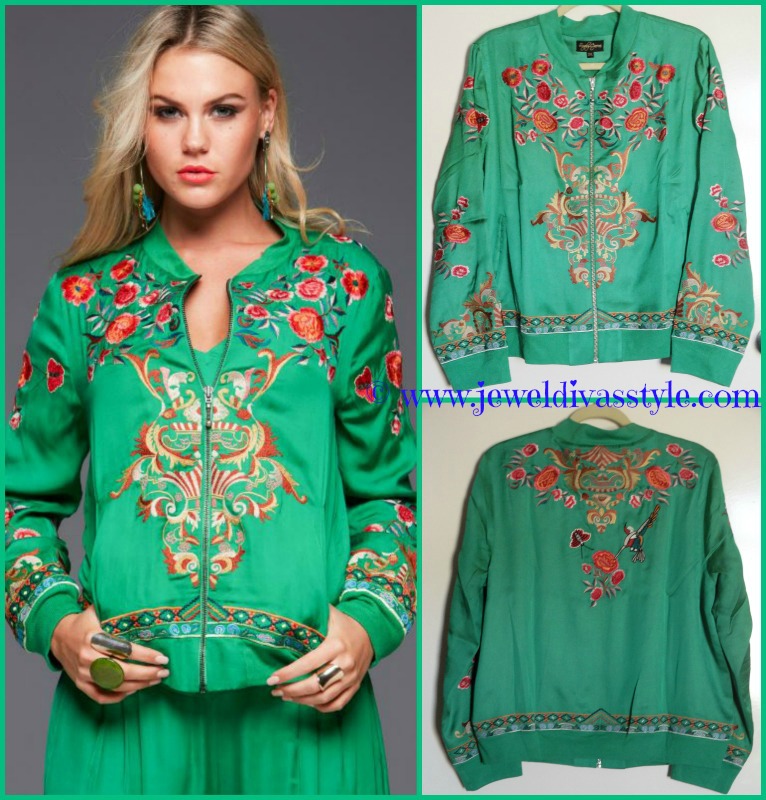 And now we come to the two items on my “lusting after” list. You can see that back in this blog post.

The “Dancing Peacock” shrug. $193.20. It was actually sold out, and then, by a miracle, I went to the site one day and there she was, right there, waiting for me to add her to my cart and buy her. So I did! 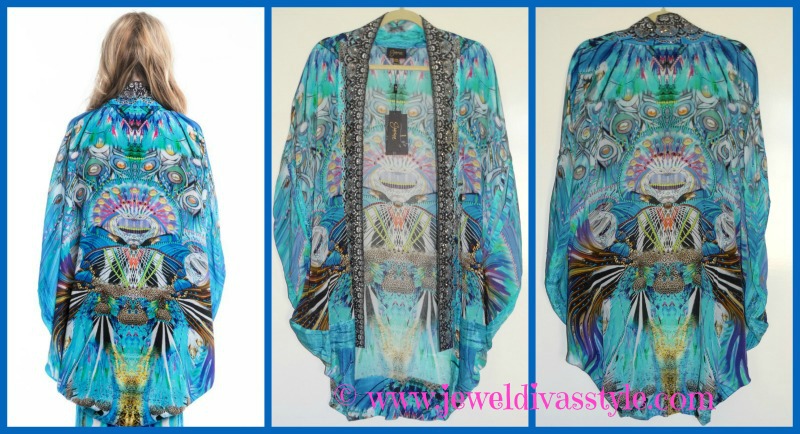 And the one item I was lusting after more than any other… the “Tropical Paradise” cape. 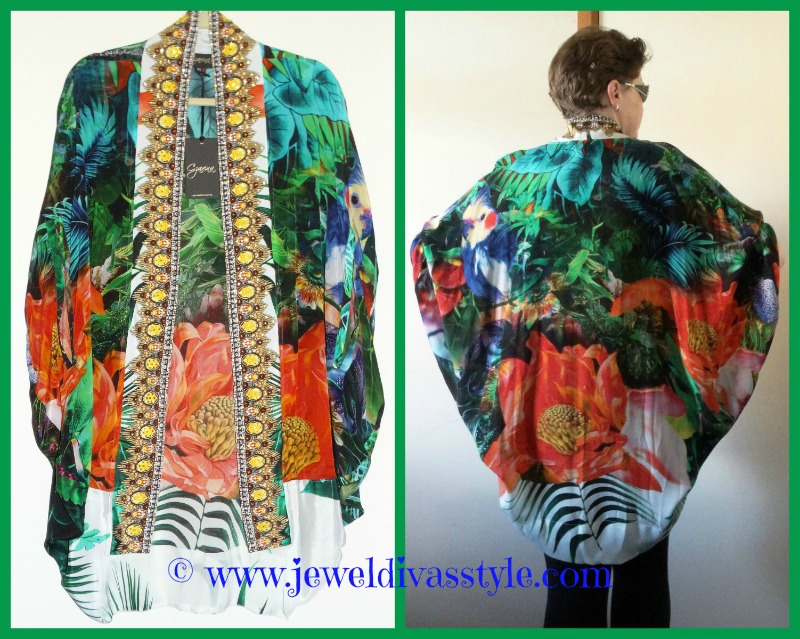 Absolutely stunning, and only $156.30. I received it about a week later and then realised they’d sent me the wrong cape. So rushed phone calls and emails and I had to pay to send it back. Another week went by and they finally found her in the warehouse just waiting for them to send her to me. It was the same as the Dancing Peacock. It had been sold out for months, and then, by a miracle, one popped back up for sale and I just happened to go to the website on that day at that time and bought her.

It even goes with the above kaftan top, Escape to Paradise. 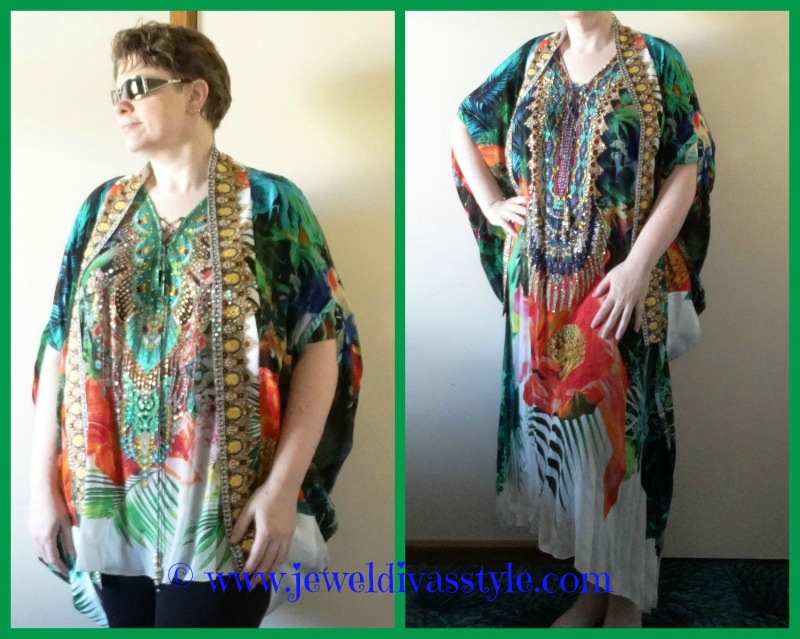 And, what’s even better, the reason I wanted it, it matches my kaftan (above right) that I bought two years ago on eBay. Here it is below. 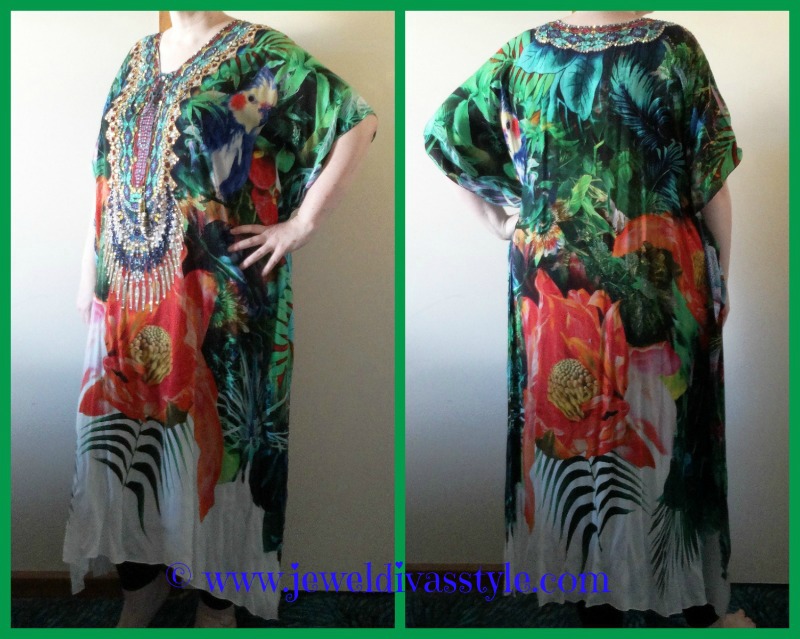 Now, we move on to jewellery.

I bought this blue necklace on eBay, and it not only matches a black and gold one I’d bought years ago, but it only cost $20. 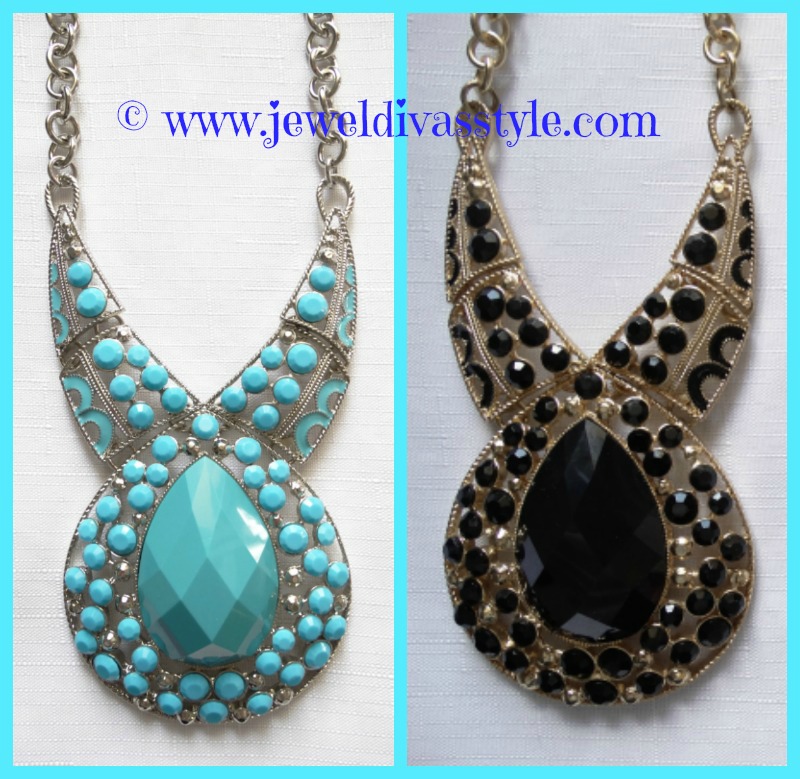 Here are the rings, earrings and brooch that I bought.

MIDDLE ROW LEFT TO RIGHT: Lovisa for $17.99 (full price), the next two are shopping centre stall bought, $5 each

BOTTOM ROW LEFT TO RIGHT: Colette earrings, full price of $20 (had to have them), two Lovisa earrings for $2.40 each, Typo earrings and brooch $5 each, and three metal stickers, $2 each. 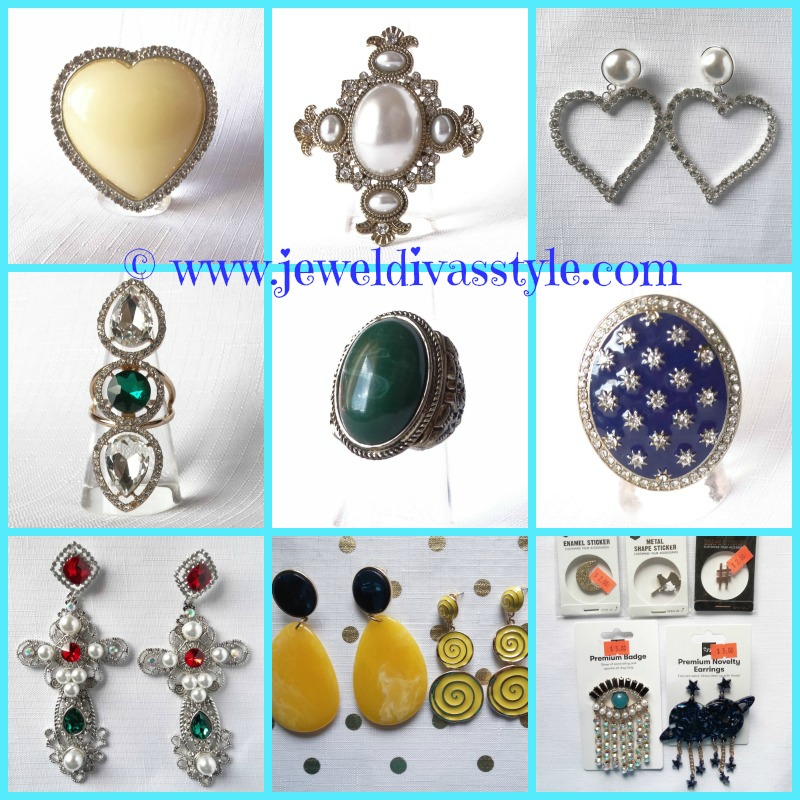 I actually wanted big yellow earrings so bought these for the sake of making one pair, which I did below. 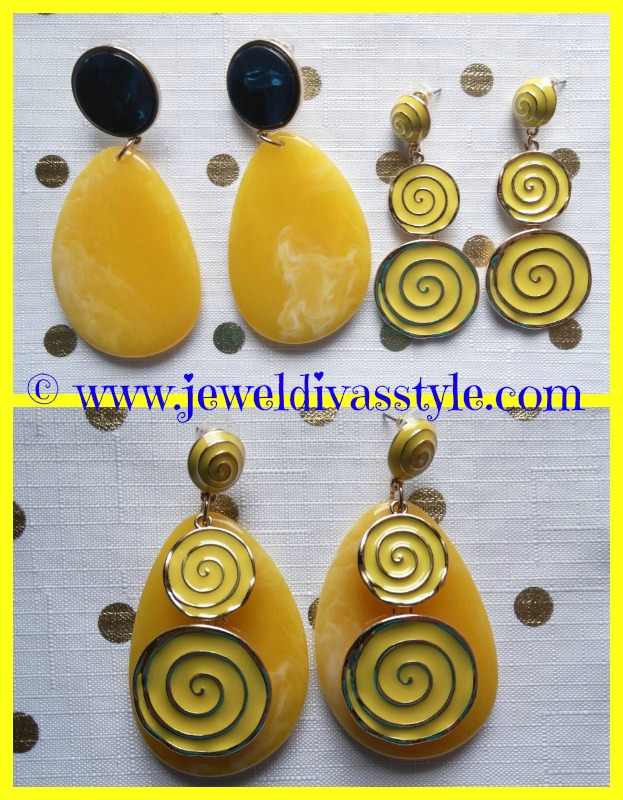 I absolutely fell in love with these boots. I mean, really, who doesn’t want stars on their boots. Real leather and $69 from Cinori. 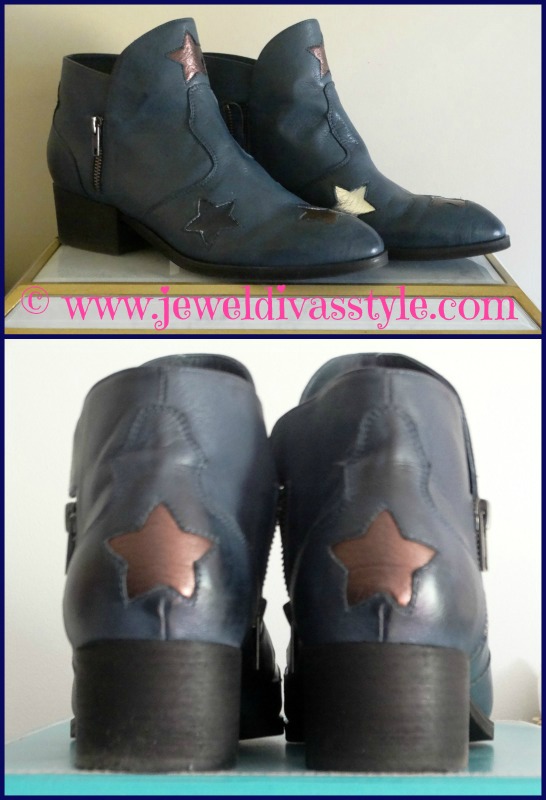 During the tax sales, I found this next bag (on the right) for $10 from Typo. It’s technically a stationery shop, but they sell all sorts of goodies now. A couple of weeks later, I found the matching laptop case online for $15. Score! (I added my keyrings)

And while shopping online at Typo, I bought this really huge tropical print mouse pad for my laptop and mouse, for $15, and this awesome eye purse for $5. 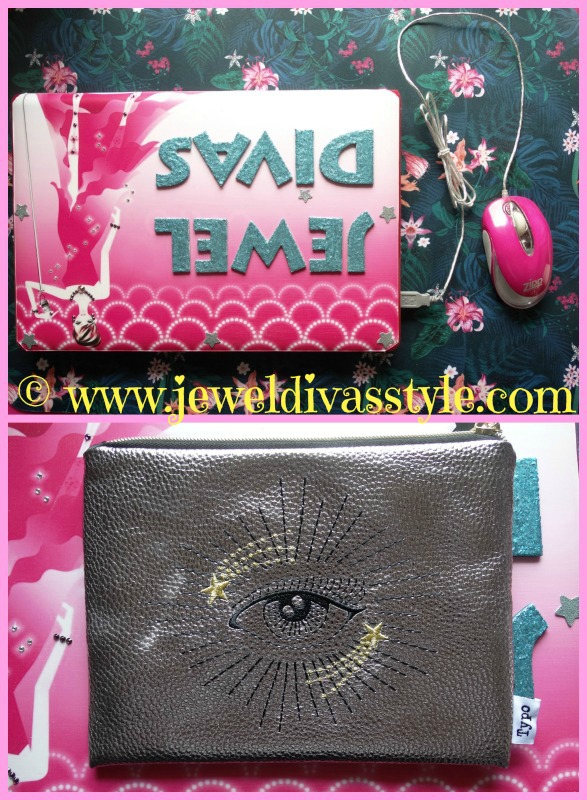 Slippers for $5 from Big W, and a navy bag for running to the doctor, $12 from Kmart. 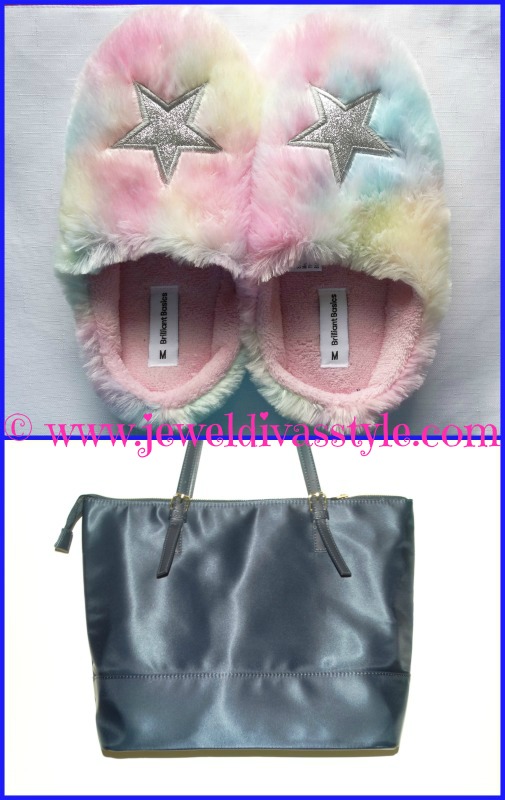 And then this. I’ve often said my biggest op shop score was my Mickey Mouse suede jacket from the Disney Store for $10. But this…may make it pale by comparison.

IF this is an authentic Chanel bag, and I have no idea how much it would normally cost, I only bought it for $7.20AU. The price tag read $9, but I signed up to their membership card and got the discount. The logo was missing from the zip, but was in the bag so I reattached it.  It has the logo stitched into all four sides, the strap is missing, there’s a scuff on the bottom, the interior is clean and new-looking, but overall, it’s in really good condition. For $7.20!!!!! That would be, at the current currency rate, about $4.90US. Yep, you read that right.

And IF it’s a knock-off, oh well, I have an awesome coloured bag that looks like a Chanel! 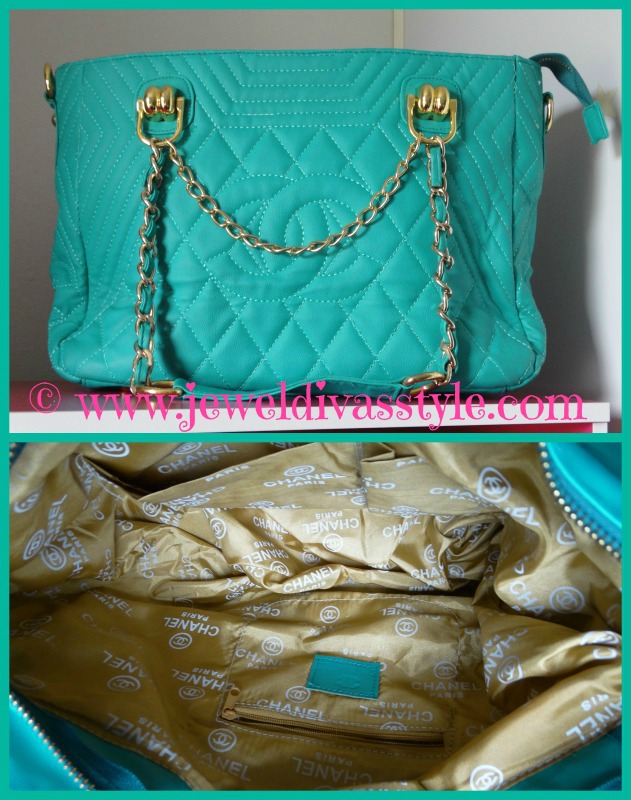 So what awesome bargains have you guys bought in the last few months?